Last time in Action Comics: now that continuity has been reset after the Mr Mxyzptlk episode, Superman travels to the Fortress of Solitude to get his new life straight in his head. Issue #977 retold the classic Kryptonian part of Kal-El’s origins and so this week we move away to his career as Superman, his time at the Daily Planet and love life with Lois Lane.

Writer Dan Jurgens does a great job at weaving together various different continuities in a way that will satisfy most fans. Classic arcs like ‘The Death and Return of Superman’ are all present and correct, alongside recent events like Clark’s time as the bearded, black-clad secret Superman. As the cover makes clear, Jurgens even looks to the Christopher Reeve movies for inspiration, as the classic scene where Supes catches Lois after she falls out of a helicopter is now part of comics lore too.

The heart of this issue comes from the highlights reel we get of Lois and Clark’s relationship. How Clark fell for her straight away, their engagement, how he revealed his secret, their marriage and then the birth of their son, Jon. This sequence, in particular, is quite touching as the boy is born in the Fortress, with Batman and Wonder Woman also in attendance. 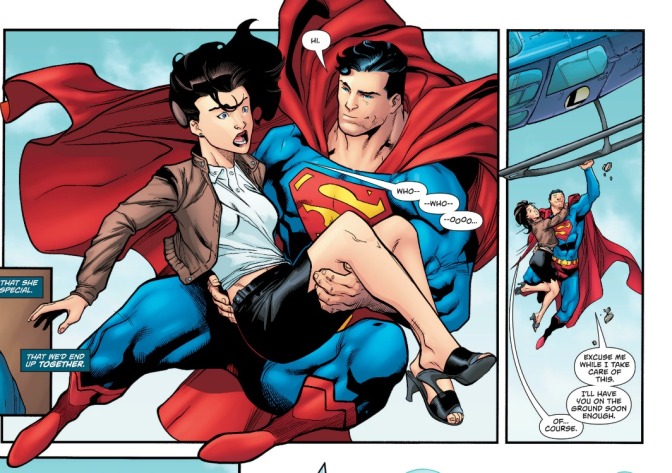 There are still some areas we are not quite clear on – where are the likes of Kon-El and Power Girl in this new timeline? – but mostly everything has been set in place. The only thing we would have asked for is to have Ma and Pa Kent alive again, or at least long enough to see their grandson, but I guess a hero’s got to have some parental tragedy in their backstory.

Meanwhile, we also get an answer to just who is the shimmering man who has been recruiting Superman’s greatest enemies. It turns out that [insert spoiler here] is creating a Superman Revenge Squad – so far including Metallo, Blanque and The Eradicator – to bring down the Man of Steel once and for all. What’s the better that they are going to fail miserably?

Unlike last issue, #978 might mostly cover familiar ground but it also gives us some things we didn’t know as it finalises the timeline of the new continuity. With great artwork from Carlo Barberi and canny writing from Jurgens, this is another strong issue for the Man of Steel.