The Ghost crew meets a group of teens who call themselves the Iron Squadron.

The Ghost, along with the Phoenix Squadron, is sent to help Rebel sympathizers evacuate from the planet Mykapo. When they arrive they find Imperial TIE fighters and a Gozanti-class cruiser chasing a lone freighter. Despite offering to assist, a voice responds on the intercom that they don’t need help and the Iron Squardon never runs. The freighter then manages deal a blow the Gozanti-class cruiser using their cargo as explosive grenades. The Ghost crew is impressed and the captain of the freighter says they have experience fighting with the Empire and subsequently welcomes them abroad. Before boarding, Hera reports the situation to Commander Sato who reveals that Iron Squadron was headed by his brother before he was killed during a battle on Mykapo. He feared that his nephew Mart Mattin had died with him but now suspects that he is captain the freighter. Sato then asks the Ghost crew to evacuate him to safety.

Upon entering the freighter (which is pretty beaten up), Hera, Sabine, Ezra and Chopper are introduced to the crew consisting of a Theelin named Gooti Terez, a human Jonner Jin, a droid called R3 and finally Captian Mart Mattin himself. They try to convince them to evacuate, but it falls on deaf ears since Mart and his crew believe they can fight the Empire. We cut over to Thrawn who is informed of the Iron Squadron freighter and the Ghost. He makes the decision to sent Admiral Konstantine handle the situation with only a light class cruiser since he believes it would more than sufficient for a man of his talents. 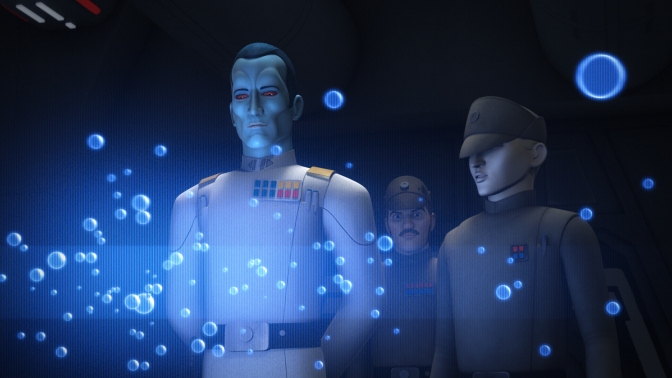 With the Ghost and the Phoenix Suadron preparing to leave, Sabine, Ezra and Chopper decide that the next best thing is to help fix the Iron Squadron’s hyperdrive so they the capability to escape when they need to. Hera permits them as they long as they get out there as soon as possible. In the process of fixing the hyperdrive they find out their reason it is not functioning probably is because the power has been rerouted to the shields and the cannons.

It is at this moment that Admiral Konstantine appears in his Imperial entourage. Mart still believes he can take them on much to Sabine and Ezra’s dismay and insistence that they should evacuate. Gooti and Jonner begin to express concern as well, saying they never faced that many ships before. Mart concedes only to close the docking door behind them and eject the Phantom II from the airlock. Ezra pleads with him, he only says to get his friends to safety. Mart then charges as the light crusier and uses his signature cargo bombing maneuver, but Konstantine is not fooled by such tactics and to Mart’s shock the the cruiser is unharmed by his assault. The Phantom II is forced to leave the Iron Squardon behind, but Ezra promises they will come back for him.

Mart manages to give out a distress signal but is cut off at the end, giving all appearances that the Empire is using him as a trap. Sato wants to go, but Hera says she’ll go with the Ghost since he is too far away. The Ghost crew along with Gooti, Jonner and R3 arrive at Mykapo again and fight the Imperial forces as well release a mine that was attached to the Iron Squardon freighter. Commander Sato unexpectedly arrives with reinforcements and he reassures his nephew that they will get him out. Having Mart utilize his bombing maneuver with his last piece of cargo, the Iron Squardon manages to land a critical hit again Konstantine’s cruiser. But before they escape Thrawn’s star destroyer enters the system, and both he and Commander Sato exchange words, giving the indication they have met before. The Rebels ships then escape to their secret base where both uncle and nephew reunite.

To be completely honest, I felt this episode was lackluster. While some of the episodes we have seen so far this season have been ill-paced, there was still an excitement in learning more about old and new characters. In this episode I didn’t get that feeling, instead all I felt was frustration at the wasted opportunity to give meaningful characterization to Commander Jun Sato, his nephew Mart Mattin and the rest of the Iron Squadron. This is the same series that gave us “The Forgotten Droid”, which made us care for a protocol droid for goodness sakes, and yet “Iron Squadron” fails to make us care about 4 people…and a droid?  I really wanted to like this episode but besides the moments with Thrawn, there was barely anything engaging about it. The worse thing storytellers can do is fail to make their audience care about the characters and needless to say this is the one the few episodes that has failed in that respect. 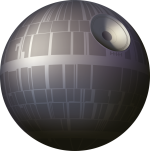