Trapped in an Imperial factory under the order of Admiral Thrawn, Kanan and Ezra get help from unexpected source…

Kanan and Ezra return to Lothal so they can team up with Ryder Azadi and the rest of Lothal resistance cell to infiltrate, retrieve intel and strike the Imperial Armory Complex. Among them is Monrad Sumar, a friend of Ezra’s parents who featured in “Fighter Flight” in season 1. It is revealed that he has been causing the speeder bikes to malfunction and explode when they reach a certain speed, as seen earlier when stormtroopers were chasing Ryder, Kanan and Ezra. Under the guise of workers they make their way into the facility, only to be called up for a inspection which is conducted by Admiral Thrawn himself.

Thrawn notes that the equipment and vehicles have a higher rate of fatality-causing failures and that he means to put a stop to it. He then orders Monrad to test one of the speeder bikes. Not having much choice in the matter, he powers it up and sure enough the engine overheats. But when Monrad tries to power it down, Thrawn states that the test is not over and turns it back on via remote access. The speeder bike engine explodes killing Monrad. Thrawn then gives orders that none of workers are allowed to leave before he inspects the line for sabotage. With full lockdown in place, the workers are then instructed to give verification of their identities before submitting to an inquiry. Knowing they would be found out, Kanan and Ezra slip away as Chopper creates a distraction by setting a speed bike lose.

After making their escape, Kanan and Ezra ditch their workers’ uniforms for that of a storm and a scout trooper before they head off try to recover intel on a top secret project in Section A-2. They see that Chopper would best suited for the job since droids are the only ones allowed in and out as long as they have an clearance code tape which they acquire from Imperial droid just before it entered into the restricted area. Chopper, however, takes longer than expected and Kanan and Ezra are spotted by stormtroopers just when he returns. Despite their efforts to fib their way out the troopers give chase and as the Jedi try to get an elevator, Agent Kallus just so happens to be in it. He orders them to come with him to secure the perimeter and the elevator door closes just before the pursing stormtroopers can reach them. 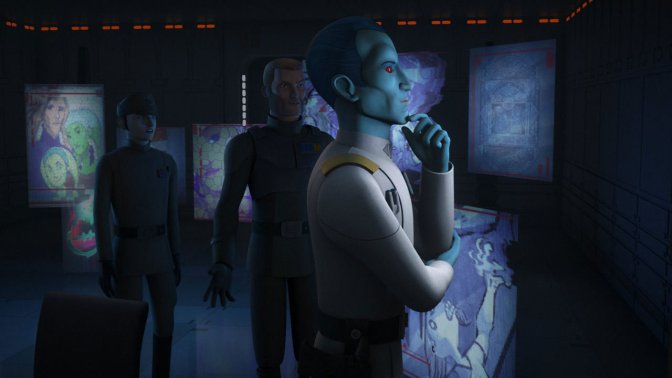 When they are alone, Kallus states that he knows who they are and that he is the Fulcrum Agent. Ezra and Kanan are not convinced and scoff at this until until he recites the code phrase “By the light of Lothal’s moons.” He says that Zeb trusted him on the ice moon, that he helped Sabine at the Skystrike Academy, and that now he trying to save them. Kanan responds that if he wants to help them, he can help them get a signal to their friends – Kallus can pretend to try and stop them from entering the communication station. After getting word to Ryder and advice from Kallus to go to East Vehicle pool acquire a Walker to escape, Ezra decides to help to make Kallus’ resistance look convincing by force pushing him through a glass monitor board… much to Kanan’s chagrin since he wanted to that himself.

Thrawn notes the shift in the Rebels’ movements and deduces right away that it is due to the fact they encountered an unlikely ally. Governor Pryce does not follow, but Thrawn informs her that the Rebels will going about a different means of escape and they must adapt accordingly. While Kanan and Ezra manage to get outside in a walker as troops are deployed to counter Ryder’s Rebel cell, they are found out thanks in no part to Thrawn’s tactical genius. A skirmish takes place resulting in an AT-AT sitting on top of their Walker; thankfully Kanan and Ezra cut through with their lightsabers. They infiltrate the AT-AT take down the rest of the walkers before making their escape with Ryder and the rest of the Rebels.

Upon receiving the intel from Section A-2, Sabine – back at headquarters – confirms that it is a new TIE interceptor outfitted with shields which would make them more difficult for Rebel pilots to take them down. They are also informed that Kallus is Fulcrum, to which Zeb states that he must have “accidentally” recruited him. In the meantime, Hera says they must be cautious until they understand what Kallus’ intentions are. Back on Lothal, Thrawn informs Pryce and Kallus he suspect that there is a mole helping the Rebels. Pryce, incensed, says they must be found immediately, but Thrawn advises that they need to be patient and wait for the spy’s next move. He then asks if Kallus agrees, to which he feigns loyalty by commending his flawless strategy.

This was a great episode, especially since it fully flushes out the development of an older character in Kallus and a newer character in Thrawn. Kallus, whom we have seen since the very beginning, has come along way from being a loyal Imperial agent to a Rebel Fulcrum agent. This is especially true after events of season 2 episode “The Honorable Ones” where he and Zeb got to see each other as more than just enemies. I was waiting to see whether saving Sabine in “The Antilles Extraction” was more than a one-time occurrence and this episode has officially proven that Kallus has become a spy for the Rebellion. Thrawn has also been given great development in this episode, demonstrating his ability to think and follow through with his strategies in order to counter his enemies. He may not have captured the Ghost crew yet, but he is hot on their trail and he will catch up with them sooner rather than later. I can’t wait to what is in store for Kallus and the Ghost crew when they counter Thrawn next time.