The beginning of issue 2 throws us straight back into the exciting cliffhanger of issue 1! Luke is confronting Darth Vader for the first time, ever, which fills a gap between Episodes IV and V, as Luke never appeared to personally face Vader until the end of Episode V. Though to some, the ignited lightsabers clashing may take away from what appeared to be their first duel on Cloud City, I argue that one clash of the sabers does not a duel make, and goes to show how much further Luke still needs to go before he could stand up to Vader later on. As Vader takes away Luke’s lightsaber, one that he begins to recognise as his own, the leg of an AT-AT Walker crashes through the ceiling, cutting off the Sith Lord and young Skywalker from each other.

We cut to find that the AT-AT Walker is the same one that Han Solo and Leia commandeered in the previous issue, as they decide to create the most direct exit out of the factory, with the imprisoned slaves in tow. Unfortunately, Vader and his Stormtroopers have recovered from the shock of the AT-AT’s entrance, and Luke is left helpless to watch as Vader controls his old lightsaber to cut down as many slaves possible.

While R2-D2 and a Jawa are under pressure by Han to get the weapons online, C-3PO is armed and ready to surrender to the ravages trying to take the Millenium Falcon apart, it’s hiding position in the junkyard causing more problems than it prevented initially. In many ways, this surrendering C-3PO makes remembering the time in Episode II where his head was accidentally attached to a Federation Battle Droid caused him to become armed and unintentionally dangerous rather hilarious. 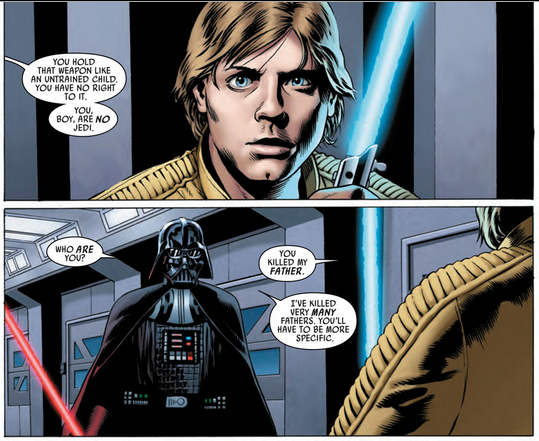 Back in the heat of battle, Skywalker comes across a moment of self-doubt, reminding himself that he was a farm boy from Tatooine… “One who could bulls-eye womp rats”, he says, spying the speeder bikes, which renews his confidence. This is a fitting reference to this skill of shooting womp rats being what helped convince his friend Biggs Darklighter in Episode IV that look could be an asset as a Rebel pilot against the Death Star. We remember how that turned out, and so does Luke, jumping on board the speeder and eliminating some Stormtroopers.

Returning to Hand and Leia aboard the AT-AT, Leia sees another opportunity to assassinate Vader, by crushing him with the leg of the AT-AT. However, instead of killing Vader and breaking the Star Wars timeline, we instead get treated to an awesome moment of Vader tapping into the Force and repelling the AT-AT leg, with excellent art from John Cassaday showing the struggle Han must be having just trying to put the leg down. Fortunately for our heroes, before the walker could be torn apart, R2 managed to get power to the weapons, and Vader barely dodges a giant laser blast, dropping what was once his lightsaber in the process, and clearing the way for the walker. We’re also shown a very heartwarming moment of Leia embracing R2, which felt very much like a long awaited “thank you” for getting the Death Star plans to the Rebel Alliance as well as powering up the Walker’s weapons.

As the issue comes to a close, Luke swoops by the wreckage of the AT-AT’s exit, retrieving his lightsaber, C-3PO is being taken apart by the scavengers and a true example of Vader’s resilience. Rising from the rubble of what would have been an ordinary man’s demise, he retrieves his helmet, which had been displaced following the collapse, something an unfortunate Stormtrooper saw and received a broken neck for his troubles, as Vader coldly forces his head to rotate a deadly 180 degrees. The final page shows Darth Vader restored to his full strength straight away, ordering the troopers to kill all rebels, while he takes care of Skywalker himself. The greatest part of this ending is how quickly Vader composes himself, showing us how resilient he truly is, something that could not be easily captured on film during the 70’s and 80’s. It’s as fearsome as it sounds.

View all posts by sjdeam