In a time where superheroes, science fiction and fantasy are incredibly popular both on the big and small screens, with such of the likes as Game of Thrones, Black Mirror and the Marvel Cinematic Universe, it’s unsurprising that Stranger Things has managed to forge itself a devoted following. However, one such reason as to why Stranger Things has perhaps made such big waves compared to other recent successful sci-fi shows is how it cleverly interweaves different genre tropes. During the first season, it expertly manages to sew together aspects of sci-fi/horror with murder mystery and government conspiracy. This altogether establishes a storyline that can be both intricate and intriguing, as well as dealing with supernatural threats and handling the real-world consequences. 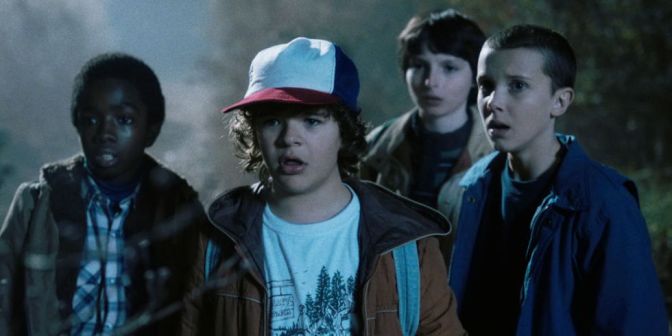 It’s often pretty hard to like a show that doesn’t have well written characters. However, Stranger Things definitely does not suffer from that problem. The A.V. club gang are a group of loveable characters and yet they are individual enough without being cliched stereotypes. The writers have also allowed for these kids to be more relatable by allowing them to swear, which adds a sense of realism in response to the situations Mike, Dustin, Lucas and Will find themselves in. It also helps aplenty that the show features multiple fleshed out adult characters too. This not only helps to prevent the series from feeling like a ‘kids’ show’, but also allows for a different perspective of how the loved ones of the younger characters deal with the fallout of the tragic events that befall on them. Joyce Byers having to watch the pain and suffering of her young son adds a far deeper emotional level to the show than if she as a parent who was kept out of the loop; a common trope in fantastical stories where the main characters are children.

Stranger Things successfully manages to establish a storyworld that is not only true to the time period it is set in but also has a far darker side. On the one hand, the show expertly manages to recreate 1980s American suburbia (just notice the attention to detail when it comes to the interior décor of the boys’ homes), a quaint small town in the middle of Indiana, but scratch the surface and access to the Upside Down is never too far away, especially in season two when the gateway literally starts growing outward from Hawkins Lab. Stranger Things displays a creepy alternative reality that is eerily cold, dark and dangerous. It’s also worth noting how the show intelligently adapts the monsters the boys play with during their games of Dungeons & Dragons, to identify and label the threats coming at them from the Upside Down. This not only adds a more playful note to the show, as oppose to giving the supernatural creatures dull scientific names, but also logically explains how the young teens would know about them and how these dark forces can be defeated.

The 1980s continues to be an extremely popular decade to explore in popular culture and Stranger Things definitely takes advantage of when its set. From playing iconic 80s pop punk to referencing beloved movies of the era like Ghostbusters, the show roots itself in the early/mid 80s and utilises some of the most popular music and cinema of the time to enhance its storytelling and identity. It’s also worth pointing out that the show includes iconic 80s actors such as Winona Ryder (Joyce Byers) and Sean Astin (Bob Newby), who made names for themselves in cult classics such as Heathers (1989) and The Goonies (1985) respectively.

Why do you think Stranger Things is so popular? Have your say in the comments!

2 thoughts on “Why Is Stranger Things So Popular?”