Not everyone has to be Chosen One. Patrick Ness tells the story of those ordinary folk outside of the limelight in The Rest of Us Just Live Here…

We’re only ever interested in the heroes who always save the day or the Chosen Ones who are destined for greatness. But what about the ordinary folk who just try to live their lives while those other guys deal with all the crazy stuff going on around them? Surely they are just as important in their own way as their heroes?

So goes the premise of Patrick Ness’ The Rest of Us Just Live Here. Mikey’s home town is frequently home to the types of fantastical events that usually are the focus of stories like this i.e. ancient gods attacking or invading aliens or vampires who the teenage female population fall in love with. However, that’s not really anything to do with him. With the girl of his dreams moving away in a few short weeks, his family on thin ice and his own problems with his mental health, he’s got enough on his plate.

As probably only someone who has mastered the genre can (Ness has won just about every award going), the book is a very clever inversion of the tropes commonly found in YA fiction. Buffy the Vampire Slayer fans, in particular, with appreciate the overlap in themes of the two. There are certainly many similarities to ‘The Zeppo’, a classic episode of that show which followed Buffy’s everyman buddy Xander while the world was under threat elsewhere. Just as that episode gave us snippets of the fight against apocalypse, Nesses utilises a nice stylistic touch here to do the same thing – each chapter start with a synopsis of the ‘main’ story, getting the heroics out the way so we can focus on the really important things. 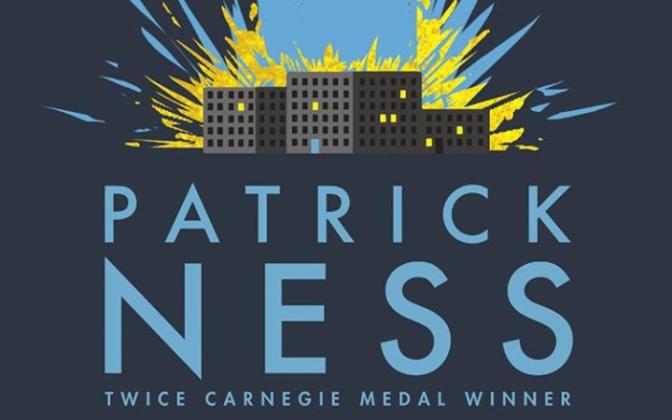 The premise would fall flat, though, if it wasn’t for the characters we are spending time with away from the main events.  Thankfully, probably Ness’ greatest strength as a writer is his knack for nailing realistic teenage characters. It is these well-drawn people who make his other books like A Monster Calls and, in particular, The Chaos Walking books come to life. Mikey and his friends are no different. Not mere archetypes, they are believable, complex people. The handling of Mikey’s dysfunctional family unit (only behind the scenes, you understand – his politically-ambitious mother would never let that get out into the open) as well as his and his sister’s issues (OCD and anorexia, respectively) are particularly well-handled.

Lovers of fantasy should be aware, however, that this isn’t the story of unlikely heroes who have to save the day. This really is what happens away from the main action. As such, some might find the emphasis on real-life teenage problems not as interesting as the promise of what is going on in the background. In many ways, The Rest of Us Just Live Here is like a John Green book happening in the midst of, well, a great number of Chosen One narratives. Instead,  the novel is actually about how every victory isn’t about saving the world. Sometimes battling your own interal demons is just as important.