If there’s something strange in the neighbourhood, we’ve been calling the Ghostbusters for over thirty years now. Let’s take a look at the evolution of the team…

The world first called on the Ghostbusters in 1984, with the release of the hit comedy movie. The first – and definitive – line-up of the team is Egon Spengler (Harold Ramis), Peter Venkman (Bill Murray), Ray Stantz (Dan Akroyd) and Winston Zeddemore (Ernie Hudson).

The Ghostbusters soon switched to animation for the curiously–titled The Real Ghostbusters, which ran from 1986 to 1991. This starred the original team, though with very different likenesses and new actors voicing the characters.

For the show, Slimer was promoted to one of the team, in a comedy sidekick role in the vein of Scooby Doo. So popular was he that the show was eventually renamed Slimer And The Real Ghostbusters. 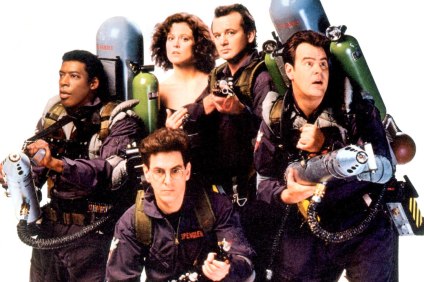 In 1990, The real Real Ghostbusters returned to cinemas for Ghostbusters II. Instead of Gozer, the team had to stop the evil living painting of Vigo The Carpathian.

A new member joined the team in Ghostbusters II, as well. Louis Tully (Rick Moranis) finally got to don a Ghostbusters suit for the film’s finale.

In 1997, a new animated series featured a brand-new incarnation of the team. The Extreme Ghostbusters saw Egon recruit a new generation of Ghostbusters, including a woman (pfft, female Ghostbusters! It’ll never catch on….). He, Slimer and Janine the Secretary were the only main characters from the films.

These Next Gen Ghostbusters consisted of Garrett Miller, Kylie Griffin, Eduardo Rivera and Roland Jackson. Goth girl Kylie was the show’s breakout character – she even later joined the original team in the IDW comic books.

A third Ghostbusters film was stuck in development hell for a long while. Featuring the original cast, it would have been called Ghostbusters III: Hell Bent and seen Manhattan transported to the Netherworld. The project was finally retired after the death of Harold Ramis in 2014.

But now a new Ghostbusters movie has finally been made! With an all female line-up, the rebooted team are Abby Yates (Melissa McCarthy), Erin Gilbert (Kristen Wig), Jillian Holtzman (Kate McKinnon) and Patty Tolan (Leslie Jones). The movie comes out this July.

Who’s seen all the different variations of the Ghostbusters? What are your opinions on the upcoming movie? Leave your thoughts in the comments!