Holy retrospective, Batman! We’re doing a lookback at every Bat-movie ever. First up, a campy classic…

The One Where: The Dynamic Duo of Batman and his faithful ward Robin have to stop the greatest threat to Gotham yet – as The Joker, The Penguin, The Riddler and Catwoman team up to form United Underworld, a supervillain team bent on world domination!

Star Turns: Batman: The Movie showcases all the series’ stars at their best – Adam West is at his most hammy, Burt Ward is at his most earnest, Frank Gorshin is at his most cackling, Burgess Meredith is at his most squawking… If you buy into the very different performances from what modern audiences are used to,  everyone is on top form.

Best Scene: Even if you haven’t seen the film, you will know of the celebrated/derided scene where Batman just can’t get rid of a bomb. There are lots of funny moments throughout but this is the most laugh-out-loud – a terrific bit of farce that feels as if it is lifted straight out of a Naked Gun film. Second place goes to the thrilling Shark Repellent Bat-Spray scene!

Verdict: Batman ’66, as it has become known, often splits fans right down the middle. For me, I think it is a thoroughly enjoyable romp which I would easily watch over a number of later Batman films. What a lot of people forget nowadays is that the movie (and its accompanying series) is intentionally campy and ridiculous. It was a genius way to keep both the kids and parents entertained, at a time when superheroes were rarely adapted. Bat-tastic!

Holy interesting trivia, Batman: Cesar Romero infamously refused to shave off his moustache for his role as The Joker. In modern HD versions of the film his whiskers can easily be made out underneath the white makeup. 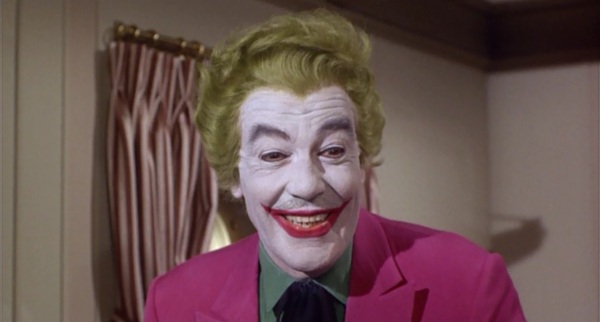