Who has the best roll call of villains and enemies in all of fiction? These are our picks…

Team-ups? Not usually, as Disney films are standalone. However, the TV movie Mickey’s House of Villains sees Jafar lead a team of baddies against Mickey and his friends.

Disney movies have a reputation for being sugary and sentimental – which is actually pretty unfair when you consider just how many fantastic and vile villains exist in the Disney animated canon. Be they inspired by characters from folk lore or original creations, Disney villains tend to be tricksters who manipulate the heroes for their own evil ends. 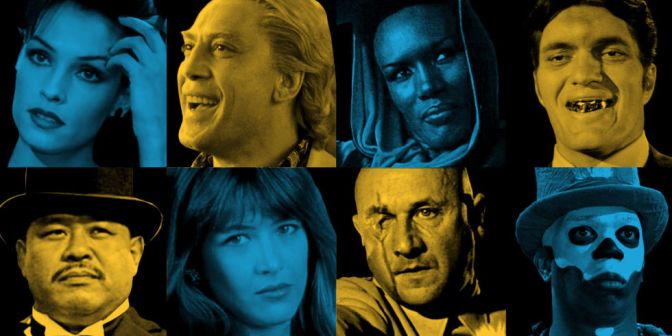 Team-ups? Many of Connery and Craig’s enemies are employed by global terrorist network SPECTRE which funds their individual nefarious schemes.

In the fifty years and counting that he has been on her majesty’s secret service, James Bond has gathered a very colourful collection of enemies. Nearly always a Bond villain will have some kind of physical deformity – eye scar, third nipple, weeping blood – and a bizarrely convoluted plan to gain power, wealth or world domination.

Team-ups? A great number of Spidey’s foes have become members of the Sinister Six at one time or another. The Six believe that they can defeat the wallcrawler if they work together. They are still waiting to be proven right…

Fittingly for a hero who gained his powers from a radioactive spider, Spider-Man‘s foes are often products of science experiments gone wrong and/or sport animal gimmicks. They also tend to have a personal hatred of Spider-Man, and actively seek him and his family out.

Team-ups? Not usually, no. But 2010’s ‘The Pandorica Opens’ saw the Doctor’s greatest foes team up to defeat him when the whole universe was threatened by the explosion of his TARDIS.

As a good-natured traveller of the universe rather than a costumed hero, the Doctor tends to come up against races and individuals with morals or ethics that conflict with his. Handily for him, they also often have an unhealthy obsession with taking over planet Earth. They should probably have learnt by now that if they just picked another planet they’d be home and dry.

Team-ups? Batman’s enemies are usually too untrustworthy and selfish to form an alliance but they do have the fact that they are roomies at Arkham Asylum in common.

The greatest rogues gallery in all of fiction has got to be those fiends that plague Batman’s home city of Gotham. As Batman tries to cure the sickness at the heart of his city, his enemies are often mentally disturbed with psychological conditions that cannot be overcome. To be honest, it is probably as much due to these guys as much as the man himself that Batman is as popular as he is.

And just before you go… Fancy subscribing to our brand new Youtube channel? Here’s our first video:

Excuse the quality, it’s still a work in progress!