The Flashpoint timeline itself might have only lasted for a single episode but this week explores its wide-reaching ramifications in a solidly dramatic way. Ironically, the new, apparently permanent, timeline is even darker than the Flashpoint one. All right, Iris and Joe had made up by the end, but Cisco’s brother doesn’t look to be coming back from the dead and the time-meddling has apparently caused the uber-bad Doctor Alchemy to be let loose.

While Iris and Joe’s conflict was over too quickly to be really impactful, Cisco’s storyline was much more affecting. Seeing everyone’s favourite character in such a sad place – not even in the mood to name supervillains! –  was genuinely upsetting. So upsetting that it watered down the should-have-been great moment of seeing Cisco finally suit up as Vibe and join Barry in the field. It’s still exciting but it’s just a shame it had to happen at the expense of happy Cisco. Hopefully, he will cheer up very quickly so we can have superhero and happy Cisco.

Another highlight was the return of John Wesley Shipp as Jay, who offers some much needed speedstery advice to the rather reckless Barry. Even when out of his Flash costume, Jay still feels like a completely different character from Henry Allen – so kudos to Mr Shipp on that one. A proper team-up between them wouldn’t go amiss in the near future. 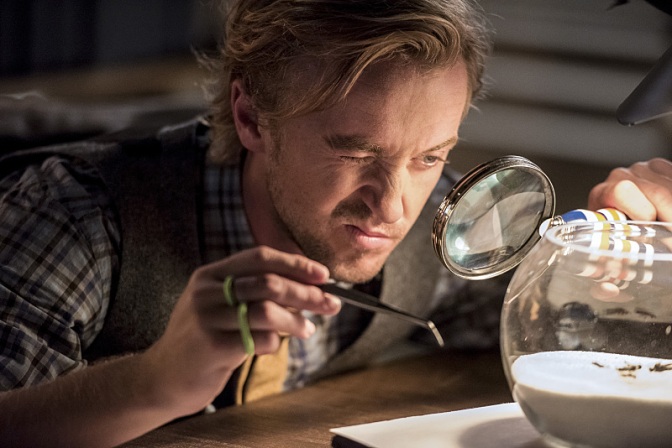 In other news, Tom Felton made his Flash debut, as Barry’s antagonistic new work chum. It’s still early days but he is definitely a fun new addition to the cast. The role has some pleasing parallels with Draco Malfoy, even though Felton’s performance is suitably far removed from his most famous role. And. I’m sorry, but there is no way that Felton is not Doctor Alchemy. That is, unless The Flash has got a lot more sophisticated in its surprise villain reveals.

All in all, this episode gave us lots to chew on. Perhaps it is too early to say, but it feels like season three is shaping up to be another strong run.