The four-way Arrowverse crossover gets off to a speedy start in this brilliant, if bloated, thrill-ride…

It’s difficult to review episodes like this. On the one hand, there is no arguing that this was so jam-packed and fast-paced that it obscured clarity and undercut dramatic potential. On the other hand, it was an absolute blast from start to finish.

The formalities of the team-up were wrapped up remarkably quickly, for example. After a brief The Flash-as-usual opening, suddenly aliens have arrived and Barry has compiled every superhero he knows to stop them (we don’t even see how Oliver contacts the Legends). Instead the meat of the episode was the team’s training – in the Hall of Justice, no less! I particularly liked how the Big Three were utilized here. Barry was made Team Leader, but Oliver was really calling the shots, while Supergirl’s status as the most powerful of them all was made clear from the off. Some of the Legends, on the other hand, were served better than others, though Heatwave’s reaction to Kara was a highlight of the episode.

But, as is the law for superhero team-ups, things couldn’t be all plain-sailing. Thanks to a pesky message from Future Barry, everyone finds out that Flash screwed up the timeline, including many of their lives. Sara’s reaction particularly hit home here, as she has also lost a family member and has access to time travel. On the other hand, I really liked Oliver’s pep talk to Barry about how he would have done the same thing in his shoes. In fact, despite this being The Flash, I thought Oliver was pretty much the main hero of this episode. 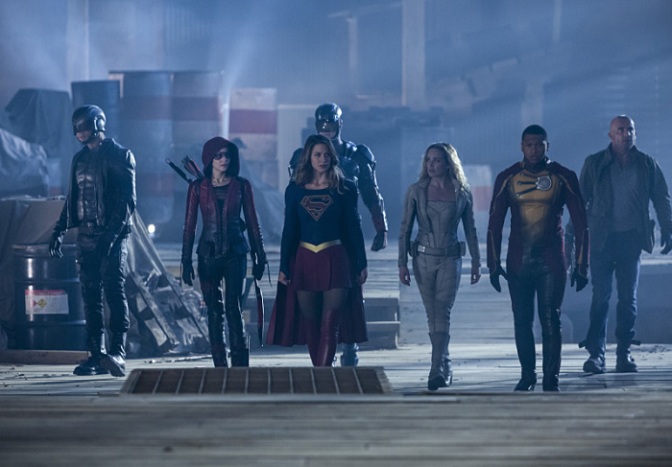 The other rule of superhero crossovers is that there must come a point where they smack each other around. Thanks to alien nasties the Dominators mind-controlling Supergirl, Speedy, Spartan and the Legends, Flash and Green Arrow had their work cut out getting out alive. Logically, of course, they should have been dead meat immediately – thanks to Supergirl alone – but we have to assume that the heroes were subconsciously holding back. The scene were Flash and Kara have a chase sequence around the STAR Labs facility was too awesome to care about these issues.

Where the episode possibly bites off more than it can chew is in the Wally subplot, which feels forced in there to remind you that this is still The Flash. Besides it’s just getting tiring to have Joe and Iris laying into Wally all the time. He just saved Barry’s life, guys, give him some slack!

Flaws or not, no Arrowverse fan could fail to love this installment of the “best team-up ever.” Roll on Arrow!