Hondo Ohnaka makes his second appearance after escaping from the Yarma reclaim station in the Season 3 premiere, where he rendezvouses with the Ghost – accompanied by the Jablogian crime lord himself Azmorgian. Most the crew is suspicious of the pirate, since he has been rather dubious in their business dealings in the past, not to mention their rather unpleasant encounter with his new business partner. But despite these concerns, Ezra vouches for him and insists they should listen to the offer. As it turns out, Hondo has located an Imperial transport ship that was caught in the upper atmosphere of the planet of Wynkahthu and its cargo contains proton bombs which are desperately need in the rebellion as well ancient artifacts and treasures, which he and Azamorigan are anxious to get their hands on . But the ship is about to pulled into a vortex which will destroy it in the process. They have to get it now before it’s lost forever.

Ultimately the Ghost crew agrees to the mission but Zeb is put in charge of the salvage team, much to Ezra’s protest. Hera explains to him that they need to be wary of Hondo since he has been known to withhold the complete truth and that he only really cares about his own profit. And wouldn’t you know it: when Zeb, Ezra, Chopper, Hondo and Azmorigan board the transport they encounter Melch, one of the Ugnaught labors Hondo recruited from the Yarma reclaim station. This proves that they have been there before which Hondo forgot to mention when was enlisting the Ghost crew’s help. Zeb is understandably angry that they had been lied to, but Ezra excuses Hondo once again saying that he only omitted certain facts. 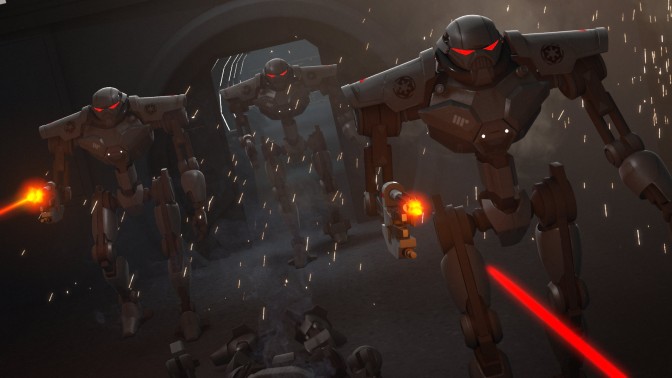 But this is not the only set back for as they are loading proton bombs onto the Ghost, they realize that Azmorigan is missing, having gone off to look for his own treasure. Zeb grudgingly goes looking for him only to be incapacitated by an Imperial sentry droid. He then wakes up in a cell across from Azmorigan who had been captured earlier. The conditions in the Wynkahthu atmosphere are getting worse and a lightning strike has veered the Imperial transport closer to the vortex. With no sign of Azmorigan or Zeb, Ezra tells Hondo that they need to find them, but the Weequay pirate states that he is too busy to help and that Azmorigan is just a business acquaintance and nothing more. Ezra realizing that he cares more about the treasure, he denounces his view and proceeds to search the ship.

Zeb is able to contact Ezra using the comlink and the young Jedi frees them from the brig. But the Imperial sentry is still on the loose and, despite warnings, Azmorigan starts shooting out of panic. While he takes it down, he inadvertently reactivated the other hibernating sentry droids and now they are all forced to make a run for it. Long story short: they all escape on the Ghost before the transport ship sinks into the vortex. Hondo gets his comeuppance when the one box he managed to get on board contained Melch who stowed away in it.

In the end, this was an great episode with lots of humorous scenes along some action. Again this can be classified as a filler episode, but it was entertaining filler. I mean when Hondo Ohnaka involved you know there going to laughs along the way. However one of the best jokes involves Ezra and a door…if you watched the episode, you’ll get what I mean. All in all “The Wynkahthu Job” was improvement from “Iron Squadron” and demonstrates Star Wars Rebels ability to rebound.