Note: We don’t usually review Legends of Tomorrow but we are this week for the big ‘Heroes vs Aliens’ crossover. You can read the previous installments of the event here, here and here.

What a terrific week this has been to be a DC fan. Sure, we’ve had the odd gripe with these episodes but the joy of seeing so many superheroes teaming up has over-ridden any trifling criticisms. Until The Defenders and Justice League arrive next year, the Arrowverse and the MCU are the only places we can go for our superhero team fix. Thankfully, Legends‘ contribution made for as strong a closer as this crossover deserved.

I can’t pretend that the Dominators, and their invasions plans, were particularly well developed – though the idea that they are mostly just interested in metahumans is an intriguing one – but they were really just the plot device to get our heroes together. And in that regard, there was much to enjoy here. Of course, the best bits are always those that deal with the Trinity – no, not Superman, Batman and Wonder Woman but Green Arrow, Flash and Supergirl. In particular, there was a nice subplot about Oliver being “unnerved” by Kara but eventually accepting her. Likewise, the final scene where Barry and Olly share a drink and reflect on their completely un-normal lives was lovely. If the episode had to sacrifice some more plot details for these character moments, I’m glad it did. 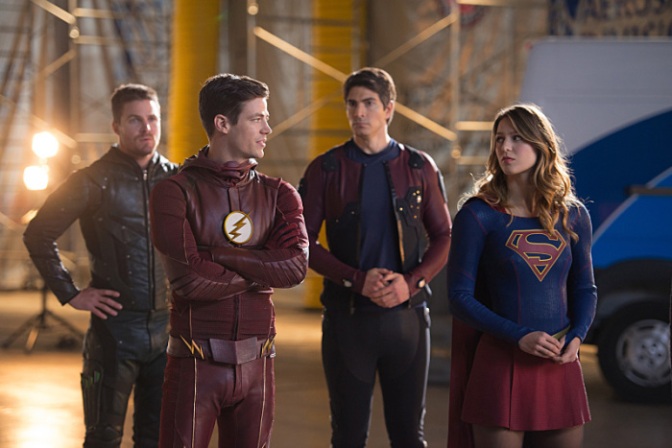 Elsewhere, Cisco and Felicity’s first trip on the Waverider was a lot of fun, and Heatwave’s barbs to everyone (“Skirt… call me”) continue to bring the laughs. It also turns out that Stein’s Sudden Daughter Syndrome is not due to Flashpoint but his own fiddling with time. This resulted in a touching subplot (that found a fitting role for Caitlin, seeing as she also has parental problems). In fact, with Cisco coming to terms with what Barry did and possibly alleviating Barry’s guilt, it looks like the Flashpoint storyline might have been wrapped up as well. In a Legends episode!

So yes: if this episode could have been longer, I would have liked to have had the aliens’ plan and certain other plot points fleshed out (how did saving that single Dominator alter the timeline again?). But on the whole, when an episode has you grinning from start to finish, you can’t complain too much. I look forward to this being a yearly tradition. Just one request: give them a team name next time. They are a league fighting for justice after all.