The first Star Wars Anthology film is here in prequel Rogue One. So how does it measure up to the main saga movies?

There was a lot riding on Rogue One. Would hardcore fans take to another prequel? Would general audiences get behind the jumping back in the timeline? And is it actually a Star Wars movie without any ties to the Skywalker family? Now that Rogue One is here and is raking in the cash and critical acclaim worldwide, we know that the answer to all those questions is a resounding yes. It isn’t perfect, but Rogue One is a unique yet familiar spin on the franchise that really puts the “wars” in Star Wars.

Where Rogue One succeeds completely is in rescuing the term “Star Wars prequel” from having negative connotations. Did we need to see this story, seeing as we know how it will end? No, but this movie doesn’t go out of its way to trample on the memory of what’s come before like previous prequels but instead hark back to the original movies in a reverent way. Like The Force Awakens before it, there are lots of nods to the past but crucially it doesn’t simply lift them wholesale. All right, this is another film revolving around a Death Star but this one has an excuse because it is dealing with the original model. To balance the nostalgia, director Gareth Edwards gives Rogue One a more modern sensibility and the film is never less than gorgeous to look at. 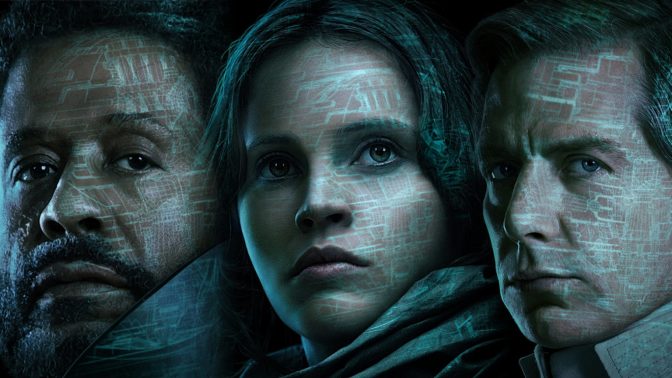 On the other hand,  the big flaw of the movie is the lack of character development. Conversely, my favourite part of The Force Awakens was the charisma of the new leads Rey, Finn and BB-8 (even a side character like Poe Dameon was awesome). After watching Rogue One, however, I can hardly remember half the team’s names. Jyn Erso, in particular, was a disappointment and didn’t show much of the grit and attitude that she demonstrated in the trailers (her signature line of “This is a rebellion, isn’t it? I rebel.” wasn’t even in the final cut). While Rogue One is unquestionably stronger in the plot department than TFW, the lack of memorable characters impacted on this viewer’s enjoyment of the film.

Likewise, Star Wars has a long history of awesome villains but Ben Mendelsohn’s Director Krennic fell short. Partly this was because the film is less interested in fleshing him out and more fascinated by reminding us how badass Darth Vader is and in bringing Peter Cushing back from the dead with some remarkable if eerie CGI. It is brilliant to see those icons again but a little more meat on Krennic wouldn’t have gone amiss. Still, if you are looking forward to seeing more of Vader in action you will not leave the cinema disappointed.

All in all, however, Rogue One remains one of the superior blockbusters of the year. Technically impressive, beautiful to look at and managing to be a love letter to the Star Wars of yesteryear while also striking out in its own, this spin-off might be a rogue entry in the franchise but, as the characters in the film might say, it’s loyalty to the cause is second to none.

Feel free to disagree with my thoughts and leave your own in the comments below!