Zeb is left in charge of the secret Rebel base and comes across an unlikely and but soon to be an unwelcome visitor.

The episode opens as two Imperial Star Destroyers dispatch pods into space. One of these pods lands on Atollon (where the Rebel base is located) and out steps a protocol droid who immediately begins scanning its surroundings, but is soon overpowered by the native krykna spiders. Meanwhile, the Ghost crew is heading on a mission, and Zeb is instructed to watch the base along with Chopper and AP-5, much to his chagrin. To avoid being looped into helping AP-5 with inventory, Zeb and Chopper decide to take look at a perimeter sensor which was knocked out by a meteor. In the process, they come across the powered down protocol droid in between two dead krykna spiders, which Zeb decides to take back to base with them despite Chopper’s protest.

Upon reviving the droid, it is apparent that it has suffered some memory loss but displays its ability to survey surroundings and accurately catalogue items within a given area. It is then decided that it will assist AP-5 with inventory. However, Zeb receives a message from Kallus under the Fulcrum guise who informs him that the Empire has been sending out E-XD Infiltrator droids the Outer Rim in search of the Rebel Base and warns they while they are harmless in protocol form, they are very dangerous when they transform into attack mode. He also adds that one of the infiltrator droids has not reported in and that the Empire will be searching for it. 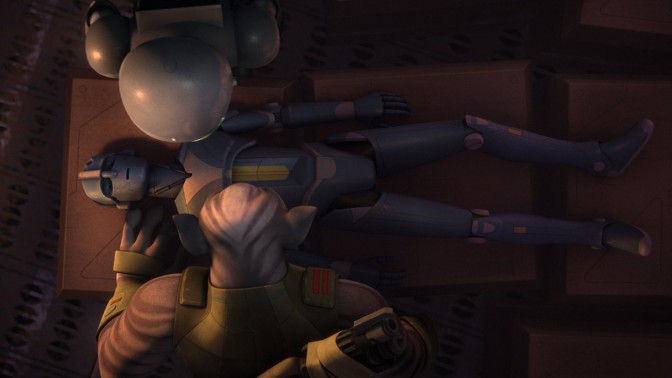 Zeb upon recognizing that the infiltrator droid and the protocol droid that they had found are one and the same, he races back to warn AP-5 and Chopper. Unfortunately upon AP-5’s mention of Rebel Base the droid begins to remember it’s purpose goes into attack mode. While putting up quite a fight, Zeb manages to catch the droid while AP-5 manages to shut it done only to reveal the droid also contains a proton warhead which has to blow up the entire base. Thankfully Chopper manages to literally freeze the countdown, giving Zeb enough time to think of a plan.

While they can’t make the infiltrator droid forget what it saw or keep it lest the Empire come a-knocking, Zeb suggests they let the droid go but program it in such away that will start the countdown for the proton warhead when it returns to the Empire, destroying any and all evidence to the location of the base. Needless to say, the plan works, severely damaging a Star Destroyer in the process which Kallus expresses his messages with genuine veneration, but much to the confusion of Hera and the rest of the Ghost crew who just returned from their mission. Meanwhile, as Kallus reports to Grand Admiral Thrawn, it is revealed that, while the location of the Rebel Base is still a mystery, the tampering of the Infiltrator droid has narrowed the search to the 94 planets that probes were sent to.

I thought I knew the direction where “Warhead” was going and while I was right on some aspects, there were still some surprises thrown in that made the episode more enjoyable as it went along. While the title of the episode and the intro scenes early on give away that the droid was an Imperial spy (…so to speak), the solution that Zeb came up with that took up the last third of the episode was rather ingenious, so much so that even AP-5 had to admit was impressive. Speaking of which I loved the inclusion of AP-5 as I have enjoyed his character since he was introduced in Season 2 episode “The Forgotten Droid,” and his interactions with Zeb are hilarious. Plus it was great for Kallus’ character, both for his interaction with Zeb at the Rebel Base and Thrawn as he is slowly tightening the noose around the Rebels. For its faults, this episode is enjoyable and setting up for even bigger things to come.