One and a half seasons into Supergirl, and we have got used to taking the rough with the smooth. For everything that works on this show, there is usually something else that doesn’t. ‘The Martian Chronicles’ encapsulates this as it had moments of greatness and moments of… not-so-greatness.

First of all, the central premise was a strong one. Kara, J’onn, M’Gann and Winn (plus a couple of disposable agents) are locked in the DEO with a White Martian who can change its form. The ‘which one is the shapeshifter’ plot is an old sci-fi trope, of course, but it’s deployed well enough here to provide some solid tense thrills. Plus, the reveal that – spoilers – there is a second White Martian in the building was a terrific rug-pull moment. In both cases, I did not suspect either Winn or Alex so kudos to the writers and the actors on that one.

Elsewhere on the good side, I always want more Martian Manhunter from Supergirl and this episode certainly delivered on that. His survivor’s guilt is even greater than Kara’s own so it is always fascinating to explore. Plus, there were more shots of his natural Green Martian form than there have been in the rest of the season. The fight between J’onn, M’Gann and her evil White Martian ex-hubby was a real highlight. The CGI on this show is reliably top-notch. 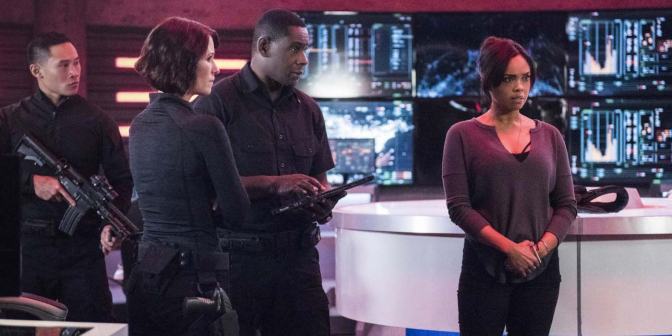 On the other hand, M’gann M’orzz has been sketchily handled this season and that continues here. On her own, she just isn’t that compelling but forming a romance with J’onn was a good move for the character that I’m surprised hadn’t come up earlier. Unfortunately, the end of this episode suggested that she is now gone for good. If that is the case, it’s a real shame. Miss Martian is a brilliant character and Supergirl should have done her (young) justice.

The real weak spot this week, however, is the handling of Kara and Mon’s romance. It was painfully obvious last week that Kara had her own feelings for Mon-El that she had to come to terms with so this subplot was entirely predictable and lacking in energy. I’ve really nothing against this show’s commitment to having a romantic angle or even Mon-El himself, but right now the show is falling into the same pitfalls as the Kara and James relationship from last year.

Ah well. Next week’s episode returns the focus to Lena Luthor and her despicable mother Lillian in an episode fittingly titled ‘Luthors.’ Let’s hope it returns the show to the form it was on before the midseason break.