Previously in ‘Superman Reborn’: Mr Mxyzptlk has removed Clark and Lois’ son Jon from reality and locked him away in his own dimension. The only way for his parents to rescue him was to restore their New 52 selves. However, they lost all memory of their son in the process.

Action Comics #976 had a lot of heavy-lifting to do. It not only had to give one last hurrah to the New 52 Superman but also merge him with the classic version to form one definitive Man of Steel. Not to mention tease more about the overarching mystery of Mr Oz that is fuelling the DC Rebirth reboot. Given that, it’s amazing that writer Dan Jurgens manages to stuff the issue full of heart, as well.

Jon’s horror at discovering his parents don’t remember him is pretty heart-breaking and the big emotional climax where the Kents prove that love really does conquer all might be too sappy for some but it’s still a triumphant moment. The plot has to make some narrative shortcuts just to keep things moving – how do those red and blue energies work again? – but it sweeps you along enough for you not to care. 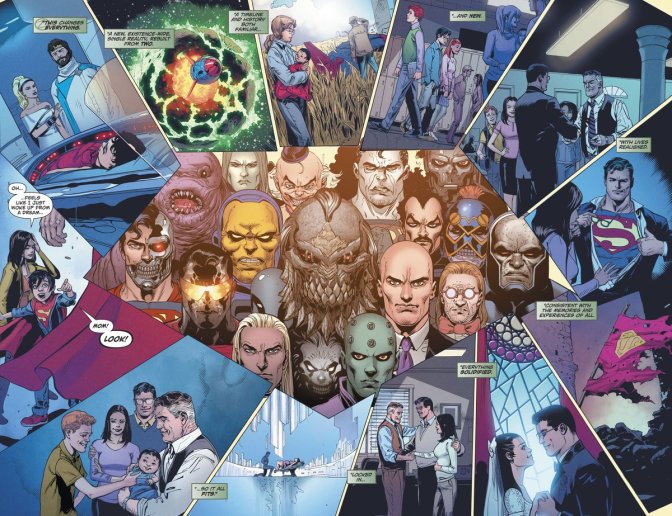 What you will probably take away from this book more than the story, though, are the many standout images. Doug Mankhe’s art is truly something special and makes this reality-bending issue a feast for the eyes. The last few pages are littered with instantly iconic panels – the Kents victorious and reunited, the splash panel glimpse at the rewritten timeline and finally Superman reborn (complete with slightly revised costume). Conversely, his Mxy isn’t the traditional goofy imp but a figure from your nightmares, with his manic, bulbous eyes and wide, toothy grin.

It’s not easy to pull off a universal reshuffle like this and still deliver a good yarn along the way but ‘Superman Reborn’ has managed it. The invention of Jon Kent and the redefinition of Clark as a family man has been a brilliant one and it’s a good move from DC to make this a permanent fixture. Plus, with this reality rewrite we can have the best of both worlds: the Kent family together and also the classic dynamic of Clark and Lois at the Daily Planet. Roll on the new era of Superman!