‘Abra Kadabra’ sums up the strange approach The Flash has taken to the comic book’s rogues gallery. Here is the debut of one of the speedster’s major enemies – it only took three whole seasons – and still the episode is all about Savitar. In effect, it feels like a bit of a waste of a potentially formidable foe. Especially considering we didn’t even learn anything new about the God of Speed anyway.

I will say that Abra Kadabra’s pseudo-magic powers made for some great set pieces. For instance,  his initial tussle with Flash – the one with the playing cards exit – and then the eventual time machine chase which allowed Flash to show off his incredible speed in a brilliantly comic book-y way. The Arrowverse has been inundated with all-powerful bad guys of late, after Mr Mxyzptlk and Music Meister but David Dasmalchian is definitely the creepiest. The guy has played a henchman of the Joker not once but twice (in The Dark Knight and Gotham) so you would expect him to bring the sinister.

But where the villain didn’t work so well was in the fact that he knew about Savitar. It was an interesting moral dilemma for Team Flash to face – can they justify letting this serial killer go if they can learn information that will save Iris’ life? – but it still needed some sort of pay-off. As it was, we never got to find out Savitar’s true identity, even though it was teased several times. With The Flash taking a month’s break, it would have been the perfect place to drop this reveal. 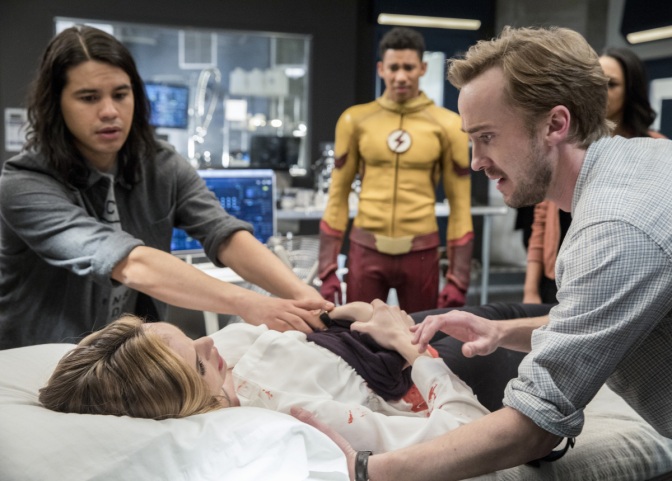 At least this storyline allowed Jesse L. Martin to get a juicy slab of drama to work with for once. He was terrific throughout, as Joe came clean about how much the threat of Iris’ death is weighing on him and his reckless decision to let Abra go was an extreme but still in-character moment for him. Unfortunately, the episode didn’t make the most use out of the returning Gypsy. I don’t mind the Cisco/Gypsy romance but it will need to actually progress somewhere soon if we are to get properly invested in it.

The Caitlin/Julian subplot was well done this episode, however, as the pair finally reconciled after Caitlin’s betrayal the other week. Caitlin got to show how badass she is, too, as she had to direct Julian’s operation on herself when she is impaled in the stomach. She, of course, also nailed the best part of the episode when she apparently dies on the operating table and is reborn as Killer Frost!  Personally, I would have loved to have had the character as this season’s big bad so I’m interested to see how things play out now Caitlin’s personality looks to be completely gone.

All in all, ‘Abra Kadabra’ had its ups and downs. While I’m not sure that it was an important enough installment to leave us hanging for four weeks, at least Barry’s final announcement that he is going back to the future (Great Scott!) has us excited for when The Flash returns.