The new Superman status quo gets off to a cracking start in this an optimistic, beautifully-drawn issue…

Now that the ‘Superman Reborn’ arc is done and dusted, Superman #20 kicks off the subtly different status quo for the Man of Steel and his family, one which merges the classic and New 52 versions together. As of now, Clark, Lois and their son Jon are living on their Hamilton farm with Superman’s secret identity once again put back in the closet.

While Peter Tomasi’s script is very strong, the big takeaway from this issue is Patrick Gleason’s simply gorgeous artwork. The opening splash page as Supes flies across the town and smiles down at the adoring citizens below is just 100% Superman and is brilliantly brought to life by John Kalisz’ bright colours. Clark and Lois are depicted as slightly younger than their pre-Reborn selves, with softer-lined faces and more accentuated features – Clark’s square jaw and Lois’ wide purple eyes.

The other highlight of the issue is a welcome and surprising crossover that for once was kept out of the publicity for the issue. About halfway through, the Kents are disturbed by some unexpected visitors – it’s only Batman and Robin! The Dark Knight thinks there is something fishy going on with Jon’s relatively limited powers. Is Batman being paranoid or is there a bigger mystery here? Well, while we don’t get many answers here, I think it’s safe to say Batman is on to something… 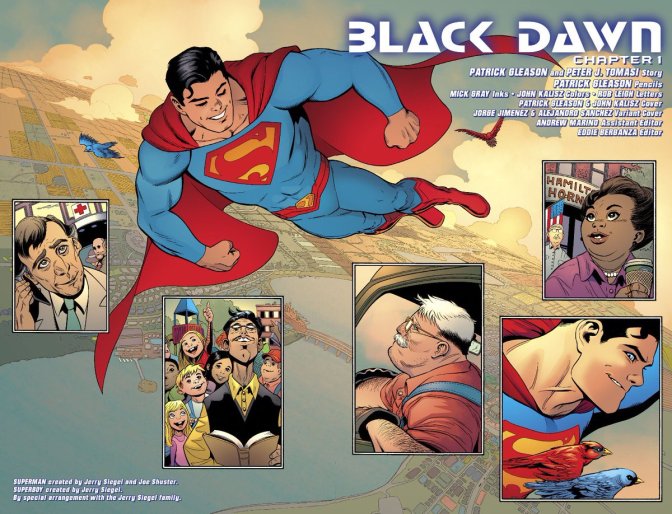 As always, there is some terrific contrast between Supes and Bats as heroes. One debate between them perfectly encapsulates their differing viewpoints. While Batman speaks of the darkness out there in the world, Clark rebuffs him by saying: “then we need to shine brighter.” There is also a lot of fun to be had, though, from simply seeing Batman incongruously sitting at the Kents’ dinner table, with a slice of apple pie sitting in front of him (cue the immortal line from Robin: “Batman doesn’t eat pie.”). It might be controversial with some fans that Batman steals the last quarter of the book but, hey, he’s Batman.

All in all, ‘Black Dawn: Part One’ might be low on stakes for the most part – though there is a sinister cliffhanger – as it is completely set in the cosy environs of the Kents’ farm. But, like a lot of the current Superman comics, it has a lot of heart and humour to make up for it. Superman’s future looks very bright indeed.