The Cavalry teams fight to get enough headband points to proceed to the final round of the UA Sports Festival.

This episode saw the ending of the Cavalry Battle and Midoriya team’s, while not in first place, still makes it to the third and final event of the Sports Festival. Needless to say, I am glad it is over; while the last few episodes were not bad per say, I have not been as invested as I would like to be. Maybe it’s because groups are pitted against one other which adds a degree of tension, especially since Iida decided to join Todoroki’s team. I also have a confession to make, I cheated and found out the winners of each event after “In Their Own Quirky Ways” so if my reaction is muted it’s because I am aware on some level of the final outcome. But for the sake of avoiding spoilers, I will refrain from speaking any further about upcoming plot points that are yet to be shown.

However there a few good things in this episode. First is that they finally have a characterization scene with Tokoyami in the form of a flashback. It was good to hear straight from the horse’s mouth – or rather hawk’s beak – about his “Dark Shadow” quirk, which packs a punch even though it is at its weakest form in the sunlight. I am liking Tokoyami so far and I can see why he has made it to the top 20 in the 2 popularity polls of My Hero Academia characters. 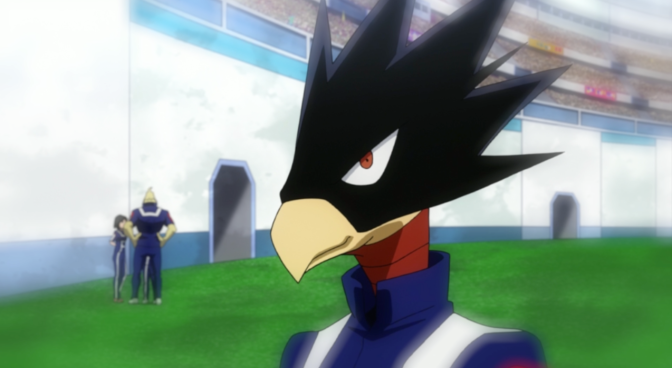 Second, we actually see Midoriya use “One for All” without hurting anyone, and most importantly himself, as he swipes away the flames on Todoroki’s left arm. This is a very big step for him and it even took Todoroki by surprise. I look forward to the day Midoriya can use his quirk without any risk of injury to himself. Too bad he was not able to take back the 10 million point headband, but thankfully Tokoyami got his back and snatched enough headbands for the team so they could go to the final level of the competition.