This episode excited and surprised me. I never thought Izuku Midoriya would win the Obstacle Course especially with the lead that Todoroki had right out of the gate. I expected that Bakugo would catch up and vie with Icy Hot (context here) for first place and that Midoriya would only just make it into the second round and pull off a win in the upcoming rounds. But he did not merely make it to the next round, he came in the lead and without using “One for All” which makes it even more impressive considering all the obstacles he had to face. Only goes to show that when you use your head, you can overcome in even most difficult circumstances.

I think it is appropriate to show Midoriya winning this first event without using his quirk in order to demonstrate to the rest of the participants, the spectators and the audience watching at home that you can succeed if you put effort into what you do. Midoriya is not as talented as Bakugou or Todoroki, but he pushes himself because he wants to become more like All Might and that’s what drives him to suceed. He’s like Batman if he inherited the power of Superman, which makes him one of the most unique heroes I have seen in a long time. 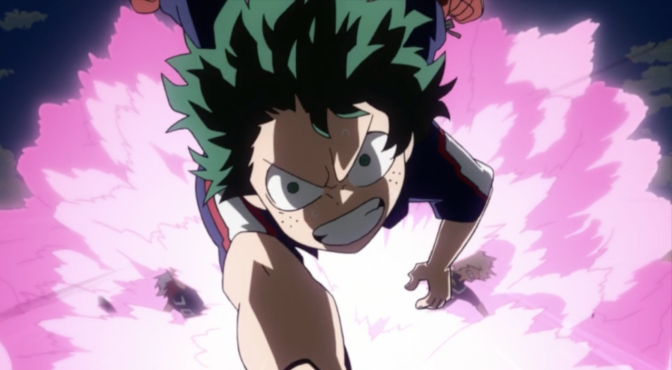 Of course Midoriya is going to be target in the second event Calvary Battle with his 100 million point value. I read other reviews that question why assign such a value when everyone else’s point value is within gradual sequence. It is legitimate considering the looks the other students gave Midoriya, which almost equate to thirsty vampires looking to the only human being in the room. While mathematically number 1 should only be 5 points higher than number 2, I think with the 10 million point value reflects the psychological value of being number 1. I would call attention to All Might’s comment that popularity plays a role in professional hero and being number 1 is going to be more highly desired than being number 2 or any other number.

Regardless the crazy point value, I still believe Midoriya earned his first place position considering all the work he went through to even get into UA High. I enjoyed the encounter between Todoroki and Bakugo, and I joke to myself that Bakugo is just jealous that Midoriya has got himself another rival. It will be interesting to see their future confrontations with Midoriya and each other. I also found the scene where All Might is looking at his young successor with pride to be very moving. I loved how All Might acknowledges both the strengths and weakness of Midoriya and how he still continues to have faith him; the mark of a true mentor. A great episode where future hero Deku earned a well-deserved victory.

One thought on “Review: My Hero Academia Ep. 16 – In Their Own Quirky Ways”