Joss Whedon will soon be joining the DC universe with his upcoming Batgirl movie. So let’s look at the Whedonverse actors who have played DC roles in the past… 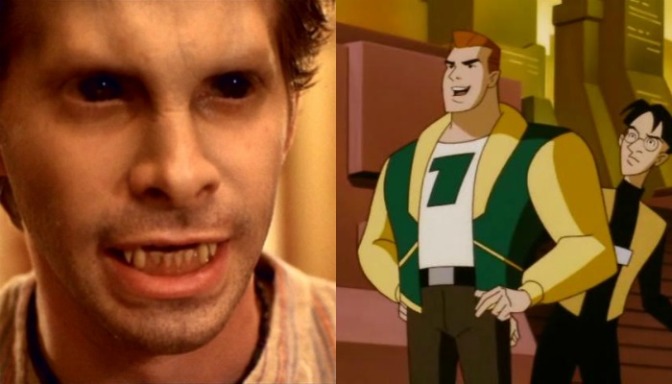 Round about the same time that he was starring as Willow’s werewolf boyfriend on Buffy, Seth Green lent his voice to a few episodes of the Batman Beyond animated series. He appeared five times as Nelson Nash, Terry McGinnis AKA Batman’s high school bully.

Tahmoh Penikett will be most known to Whedon fans for his regular role on Dollhouse, but this is just one of a huge number of supporting TV roles, including parts on Arrow and Smallville (on which he played two different characters). He also popped up on the big screen in Man of Steel and played Wonder Woman’s beau Steve Trevor in an animated straight-to-DVD movie.

Whedonverse Appearances: Buffy the Vampire Slayer/Angel as Wesley Wyndam-Price,
Dollhouse as Senator Daniel Perrin, Much Ado About Nothing as Benedick, The Avengers as The Other.

Like Seth Green and many other actors on this list, Alexis Denisof has also lent his voice to the DC Animated Universe. As well as a brief part in Batman Beyond, he featured as Mirror Master, one of the Flash’s rogues, in JLU. He later reprised the part six years later for a straight-to-DVD movie.

Angel‘s J. August Richards has played both a Marvel and a DC villain since the end of that show. As well as portraying Deathlok on Whedon’s Agents of SHIELD, he turned up as the sinister assassin Mr Blank in an episode of Arrow‘s first season.