My Hero Academia‘s latest episode blitzes through the first round of UA Sports Festival’s Tournament as we prepare for Uraraka and Bakugo’s fight.

This was a catch-all of the first round battles minus Midoriya’s and Todoroki’s fights in the previous episode as well Uraraka and Bakugo’s upcoming match-up. That doesn’t mean that nothing interesting happened in this episode; far from it. I appreciated that My Hero Academia didn’t shy away from guy and girl fights unlike a lot of shōnen animes and mangas that I have seen and read. I am also glad that we have two girls that moving on to the second round, which includes Class 1-A’s Mina Ashido and Class 1-B’s Ibara Shiozaki. It was fun watching the opponents face other and see both old and new characters interact with each other along with a bit more humor than Midoriya’s and Todoroki’s battles. Midoriya’s feverish note-taking also adds to that enjoyment. 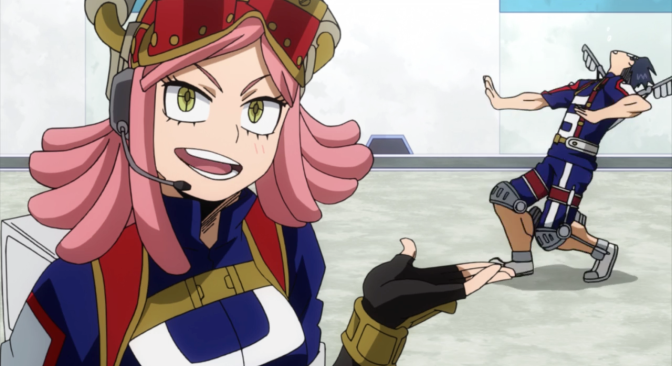 By far the most bizarre of the match-ups was Iida’s and Mei-Mei’s, but I think was more of a live infomercial than tournament battle. Even though Iida won by default, Mei-Mei was in complete control the entire time and shamelessly self-promoting her technical genius and vast array of gadgets. The second runner-up of most bizarre battles would have to the fight between Eijiro Kirishima vs. Tetsutetsu Tetsutetsu (seriously, who names their child that!). They were the most even match-up – in fact, they were so evenly tied that they knocked each other out. Now they need to conduct an arm wrestling contest in order to produce a winner.

Despite various and humorous clashes between the UA students, there is an underlying current of seriousness as Uraraka prepares for her battle with Bakugo. Uraraka puts a brave face on it and is determined to give her best effort and kindly rejects Midoriya’s offer to give her some pointers based on his own observation notes. I sure hope that Uraraka does give Bakugo a challenge and she demonstrates just what she can do with “Zero Gravity.” Good buildup for what promises to be a very engaging fight.