The battle between Midoriya and Shinso comes to its conclusion with more revelations of the nature of “One for All,” Shinso’s backstory and the Todoroki father-son reunion.

First things first, this is an amazing episode that’s on par with “In Their Own Quirky Ways” where Midoriya once again demonstrates his ability to take on almost impossible challenges head on. After last episode, I was wondering how exactly would Midoriya break Shinso’s hold over him. Thankfully they gave some explanation via Mashirao Ojiro’s observations in which he remarks that the one most effective way is to avoid responding to Shinso in the first place. However, Ojiro does say there is a chance to break out of the mental prison since he himself was shocked back into reality when he bumped into someone during the Cavalry Battle. This makes the way Midoriya breaks out so ingenious for the pain he experiences in the backlash of “One for All” was used to make him come to his senses before he crossed the arena boundary line. Also, we get to see “visions” of the previous hosts of “One for All” which raises even more questions as to the full nature of this very unique quirk. 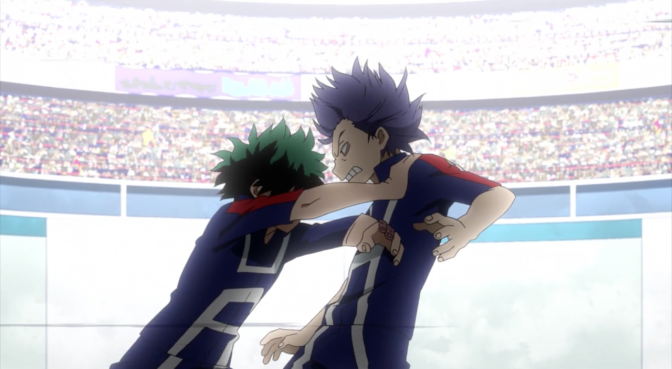 Shinso is fleshed out more in this episode and it is revealed that, despite his appearance and quirk, he has a strong desire to become a hero. I like how Midoriya identifies with him since having people from his past and some present…mainly Bakugo…believing he could never make it as a hero, although it was for completely different reason than Shinso. Shinso’s quirk, “Brainwashing,” has the ability to control others which is considered by most people to be a perfect power for a villain. But as the heroes in the crowd observed, this power can be used for good and it would be handy to use when restraining villains. Personally, I also think this would be a great power to use in questioning uncooperative villains who have life-saving information they need to get quickly. Needless to say, Shinso has now become one of my favorite side characters and I hope he comes back later in the series.

By the way, I hate Endeavor more than ever, after seeing him interact with his son, Shoto Todoroki, for the first time on screen. Like it was established in the previous episode he only views Todoroki as a tool in his quest to topple All Might from his position as number one hero. In some ways, I don’t blame Todoroki for the overkill iceberg that he created to win his first match against Hanta Sero, since he was forced to channel his anger away from his father. However, I think Endeavor should have been in blast zone instead of Sero. In any case, it demonstrates once more that Todoroki even when using his ice powers is a force to be reckoned with. “Victory or Defeat” was a great episode and I look forward to seeing the other matches as we countdown to the 2nd round of the Tournament.