Now that Marvel’s Darth Vader series has been rebooted, we take a look back at the first issue of Kieron Gillen’s excellent original run…

Along with the announcement of a brand new Star Wars comic series from Marvel, a second ongoing title was announced: Darth Vader! This tragic villain has managed to strike a chord with audiences across the world, with his ominous breathing, his expressionless mask and tragic backstory. Darth Vader was a broken man, shut off from the outside world by a suit of armour, not unlike another Marvel icon…

That’s right! The creative force behind this book, writer Kieron Gillen and Salvador Larocca, have both been behind some of Iron Man’s latest comic book stories, and their work with men in machines translates very well to Darth Vader #1. As an added bonus, the cover work is none by none other than Iron Man: Extremis artist Adi Granov, who always manages to pull off dynamic covers starring the cybernetic man in black.

As for the story, it starts just after the events of the first Star Wars film and, more specifically, after the opening arc of Aaron and Cassaday’s Star Wars comic. Here we see Darth Vader in an unusual position; not only has he failed his Emperor and Sith master once, with the Death Star’s destruction, but he has also failed once more after the Rebel incursion of the Cymoon One factory. In an almost dark mirror image of Luke Skywalker’s entrance in Return of the Jedi, Vader follows the pathway his son will take in about 4 years time. He walks silently through the gigantic entrance door to Jabba’s palace, he murders two Gammoran guards and threatens Bib Fortuna with his lightsaber, demanding audience with the Hutt.

Jabba and Vader have their informal conference, surrounded by the scum of Tatooine and Boba Fett. Like with Leia’s underestimation of the powers of the Sith in Star Wars #1, Jabba too makes that mistake, even infuriating the impatient Lord Vader by calling him a “Jedi”. An attempt is made on Vader’s life, resulting in the slaughter of more guards and criminals. Turning to his favourite of weapons, Darth Vader performs his famous Force Choke on the Hutt, a foreshadowing of his final fate, and pushes Jabba into an agreement to supply the Empire with whatever materials they need. For Vader, a mission accomplished. 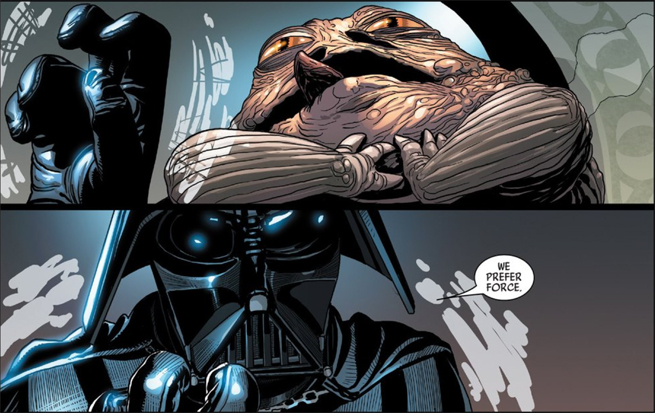 Once the agreement is struck, time turns back eighteen hours, and Emperor Palpatine is chiding Vader for his defeats at the hands of the Rebels. Soon after, a reveal is made: not all of the commanders of the Death Star perished in the explosion. General, now Grand General, Cassius Tagge survived the destruction as he was investigating the false claims of a Rebel base on Dantooine. With clever writing on the part of Gillen, a small character part has bloomed into a larger antagonist and even worse: he’s now Vader’s boss!

The issue comes to a close with some good-old fashioned Sith treachery and betrayal. Asked about anything else Vader should inform the Emperor of, Vader willingly withholds information regarding Kenobi’s survival and death and a close encounter with the boy strong enough in the Force to destroy the Death Star and wield a familiar lightsaber. Back to the present time on Tatooine, Vader has held a second, secret meeting with Boba Fett and his Wookiee compatriot, Krrsantan, turning the recurring bounty hunter into more of a foil for Han Solo. It is at this point that Vader has officially begun the path that leads to his revelation on Cloud City: “No, I am your father.” How Boba Fett performs in his duty will soon be seen. In a final splash page, Darth Vader hearkens back to the loss of his mother, by once more slaughtering the Tusken Raiders. Not just the men, but the women and children too.

This opening issue of Darth Vader was full of excitement and, more importantly, real consequences for his failures that we never got to see on screen. Having Darth Vader start from the bottom in this series will go a long way to show him rise back to the top and regain his master’s favour that we see in Episodes Five and Six. Gillen’s writing of Darth Vader is perfect, you can hear James Earl Jones’ deep, foreboding voice within your head, amongst the breathing of his apparatus, while his mechanical look is perfectly captured by Larocca and colourist Edgar Delgado, whose Spider-Man work with Humberto Ramos has made me a fan, chooses a fine colour palate for the darker side of the Star Wars world, even making Vader’s helmet shine perfectly on sandy Tatooine.

Everything about this issue feels like a Star Wars book, and the chance to focus on our favourite Dark Lord himself is a treat no fan should pass up. Even the strong ties this book has with the ongoing Star Wars series shows how strongly committed Marvel Comics is to deliver the very best of stories it can tell in that galaxy far, far away and keep a tight continuity that fits in with the films and other expanded universe media. The first step has been taken, and I look forward to where this journey takes us.

View all posts by sjdeam