After the past two issues have repeatedly teased his arrival, Superman’s Kryptonian nemesis General Zod is finally here. With Supes still stuck in the horrific Black Vault at Belle Reve, Cyborg Superman and the Eradicator free the warlord from under Amanda Waller’s control and make a deal. If Zod helps joins with the Superman Revenge Squad to take down the Man of Steel, they will get him access to the Phantom Zone, allowing him to free his army and take over Earth.

Unfortunately, just at the worst moment, Superman is not his usual self. Even after escaping the Black Vault, he is hopelessly outclassed in a fight with his three enemies and even flees the scene. It’s tough to see the Big Blue Boy Scout being kicked around like this but it’s also kind of satisfying – sorry Supes! – to see the Revenge Squad finally laying into him, after issues of build up. Just how the heck will he eventually beat these guys? 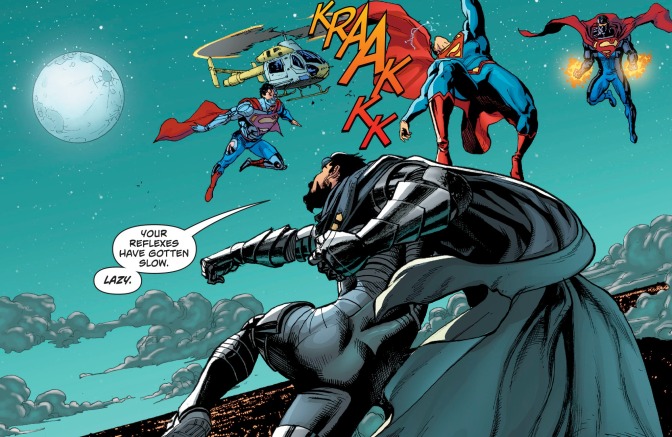 Everything in the issue builds up to what we can only call a blinding cliffhanger of the sort that makes you immediately re-read the issue and look at it in a new light. Any Doctor Who viewers reading will find it oddly similar to an episode of the show that aired just a few weeks back. There’s also an interesting parallel with events going on in the other Superman title at the moment. Highlight the following for spoilers: Now that Clark is blind in Action Comics and Lois has just lost her leg in Superman, that means both of the Kents are currently suffering from a sudden disability.

Jack Herbert does a terrific job on art duties – in particular, he clearly puts his all into illustrating the dynamic four-way fight between Supes and his enemies that has a great visual backdrop as it happens in the skies above nighttime Metropolis. There are also some brief but welcome cameos from the Superman family – Supergirl, New Super-Man and, uh, Lex Luthor – that are presumably teasing a bigger role for them next issue.

All in all, Actions Comics #981 doesn’t move the arc along too much and it is so fast-paced that it lacks a little depth, but it is still an exciting read with some awesome artwork that ends on an intriguing reveal.