In the second half of the eight-part miniseries, Marvel’s The Defenders ups the action, pace and heavy emotional beats as it gears up for the big climax.

Over episodes five to eight, we discover that The Hand need Danny Rand/Iron Fist to unlock a gateway in order to retrieve the mystical substance that provides them with their immortality, which just so happens to be hidden within the skeleton of a dragon – because why not. This leads to the reborn Elektra taking out Stick (which feels nice to get some emotional payoff for her character, as we are aware of the abuse she suffered from him) and capturing Danny. Jessica and Matt, on the other hand, conveniently find the plans to Midland Circle, the building that houses The Hand’s corporate operations, and discover a physical anomaly which may hide The Hand’s mysteries. What follows is an epic showdown in depths of underground New York, as The Defenders and friends take on Elektra and the remaining powers of The Hand.

Whilst the rest of the Defenders escape the building, Matt is left to battle Elektra. Whilst the two kiss and become hidden by rubble and dust, the fate of the characters left behind in the underground when the explosions go off still remains to be seen. It’s definitely no surprise that Matt survives, especially given that a third season of Daredevil is confirmed. How he was rescued and whether Elektra will appear again in the near future are both questions to be answered at a later date, it would seem. 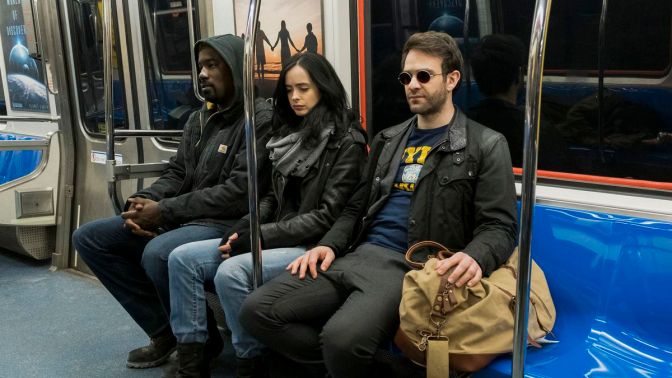 However, these episodes are not all pain and sorrow. Jessica provides some much-needed dry humour and snark. The moment when she steals a can of beer from a passed-out drunk as herself, Luke and Matt are forced to take the subway is a particular highlight for me. It’s also enjoyable to watch these four characters come together to form a team that is not only physically compatible but whose personalities also bounce off one another’s in an extremely watchable and satisfying way too.

Whilst the overall plot of this season has been simplistic, that does not mean to say it has been dull. Defenders seems to be aware of the intelligence of its audience and drops just enough clues for the viewer to piece together the narrative without being ridiculously complex or the need for pointless exposition. Gorgeously shot extended action sequences also feature more heavily later on too, which are not only enjoyably dramatic but also satisfyingly realistic. Throughout, Defenders keeps its action believable whilst also showcasing the superhero abilities of its main characters, never once indulging in the garish, over-the-top theatrics and effects that have become so commonplace within the modern live-action superhero genre.

Special visual effects are used extremely well throughout the duration of The Defenders, however. e.g. The dragon’s skeleton and the explosion that brings down the Midland Circle high-rise deserve to be mentioned. As I forgot to mention in my previous review, the opening titles are also worth a shout out too. The colours and the silhouettes of the characters, as well as the subtle iconography of New York city, provide a stunning intro to each episode, something which is sorely missing from a large chunk of network television.

The show, however, is not absent of some minor flaws. Whilst having Elektra brutally stab Alexandra is both shocking and violent, it feels like a waste of such an interesting character (and the wonderful presence of Weaver) that definitely seemed like she had far more potential that could’ve been explored.

The series also relies far too heavily on the events of the most recent season of Daredevil. Characters associated to Matthew Murdock and even minor plot points of Daredevil season two become incredibly vital episodes to the Defenders narrative, whilst the events of the other Defender shows are completely excluded or only briefly namedropped. A reference to Kilgrave is merely nothing more than an Easter egg.

And whilst we’re at it, Danny Rand is ultimately the weakest link of the group. Although becoming slightly more watchable as the episodes go by, his arrogance not only makes him frustrating to watch but mostly just boring, as these are archetypes associated with so many popular male superheroes.

These aside, The Defenders is a series that perhaps could have benefitted from being a little longer like its associated spin-offs, but manages to be both highly enjoyable and satisfying all the same. It almost seamlessly manages to bring together these beloved characters Netflix audiences have come to know over the past few years, in a way that feels authentic, true to their characters and yet still a lot of fun. Season one is essentially a short story, which could easily be imagined taking place over a short comic run, that is easy to understand without relying on the viewer being an invested fan in Marvel Netflix’s shows beforehand, that still presents a more mature version of the Marvel Cinematic Universe incredibly well.

Oh, and if you were patient enough to wait until the credits had rolled for the last episode, you’d be treated to an exciting teaser for The Punisher series, which will be following The Defenders before the year is out!