Dread it. Run from it. The biggest Marvel movie yet has still arrived. Here’s our thoughts on the titanic achievement that is Avengers: Infinity War…

There are so many ways in which Avengers: Infinity War could have gone wrong. Though Marvel Studios have typically treated their movies with care over the past ten years there was so much riding on this one that you couldn’t have blamed them if, say, the directors failed to handle the massive cast or the writers struggled to tie all the loose ends of the franchise together. The remarkable thing is, though, that Infinity War is not just another successful, enjoyable superhero movie, it’s a staggeringly well-made piece of blockbuster entertainment.

Going into Infinity War, many of us were probably expecting our favourite characters to be shortchanged as there were just too many big names in the cast. As it happens, just about everyone gets their chance to shine. Of the major heroes, Iron Man, Captain America, Thor, Strange, Spider-Man and Star-Lord get a sizeable chunk of the action, with the cast all providing great performances.

What’s more, Infinity War even finds time to flesh out characters who were perhaps not as three-dimensional as they could have been in previous movies. In particular, Vision, Scarlet Witch and Gamora have by far their most engaging story arcs in this film. If this is something about how the cast is served that’s disappointing it’s the relatively little screentime for the Wakandan crew, but that’s only because this film was made before Black Panther became the phenomenon that it is. 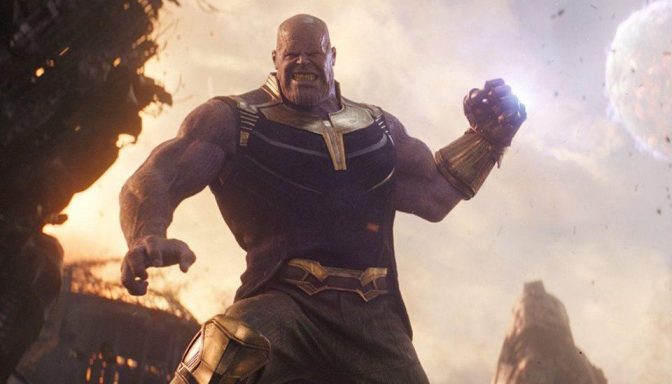 Unexpectedly, the star of the show, however, is probably Thanos, the big purple overlord himself. We can admit now that the villain’s previous cameos in the MCU really hadn’t been that inspiring and seemed to be setting us up for a fairly generic alien invader when the time came for him to take centre stage. What we didn’t expect is for him to be portrayed as a layered anti-hero who sees himself as the savior of the universe and the Avengers as the villains. Despite being totally CGI, Josh Brolin’s textured performance comes through, making Thanos part of the franchise’s trinity of great villains – alongside Loki and Killmonger.

If we have one major criticism, it is that the first half of the movie could be said to be a series of vignettes starring the different bubbles of characters rather than a cohesive whole. You could also argue that not all of the jokes land and the mix of light and shade can occasionally cause the film to suffer from tonal whiplash. Though it has to be said that when they jokes do hit home, they are often laugh-out-loud hilarious. Everyone is going to have their own favourite line.

However, once Infinity War gets into its groove, the film delivers a true cinematic spectacle that perfectly marries action and excitement with an enormous emotional heft. Seriously, forget Batman v Superman, Avengers: Infinity War has to be the darkest superhero movie ever made. I’m not sure there’s any other entry in the genre that can claim to be so thoroughly emotionally devastating. Yet, at the same time, utterly exhilarating.

The Marvel Cinematic Universe has had many highs over its first decade, but Avengers: Infinity War is – at least currently – its crowning glory. To not only balance the eye-watering amount of elements in a satisfactory way but to serve up something truly exemplary is a truly titanic achievement. Your humble reviewer has yet to watch the movie again, but I have a feeling it will hold up on further viewings. And let’s not forget that this is just part one and the untitled fourth Avengers is still to come next May. Going by the quality of Infinity War, the heights that film could reach are infinite.

READ ON FOR A SPOILER-Y DISCUSSION