The focus shifts to Melanie, Cary, Kerry and Lenny as Legion‘s second season begins to draw to a close…

A quirk of Legion‘s second season is that it has often decided to juggle its large cast of characters by devoting whole episodes to one of them – the Syd episode, the Lenny episode, the David episode ETC. It has its plusses, but the one big drawback of this approach is that it halts the overarching story. Thankfully ‘Chapter 17’ did focus on a bunch of its supporting cast but also married that with some narrative momentum to create a thoroughly enjoyable installment.

First of all, we get some context for Melanie’s attack on Clarke at the end of ‘Chapter 16’ which revealed that was under the thrall of the Shadow King. We learn that Oliver (well, Oliver/Farouk) has been visiting his wife in her dreams, seriously undermining her sense of reality. While it’s been interesting to see Jean Smart get to play Melanie as very different from last year’s sophisticated leader, she hasn’t been given too much to do until this episode, so this subplot was much needed.

Back in the here and now, David’s plan continues to come together as Cary and Kerry fulfill their part by stealing a weapon from Division 3 and leaving it in a parked car. With that out the way, we get a delightful scene between them which goes from the comedy of Cary attempting to explain idioms to Kerry to the pathos of him warning her that he will die someday and she will be alone. I love these two so this better not be foreshadowing Cary’s death in the finale. 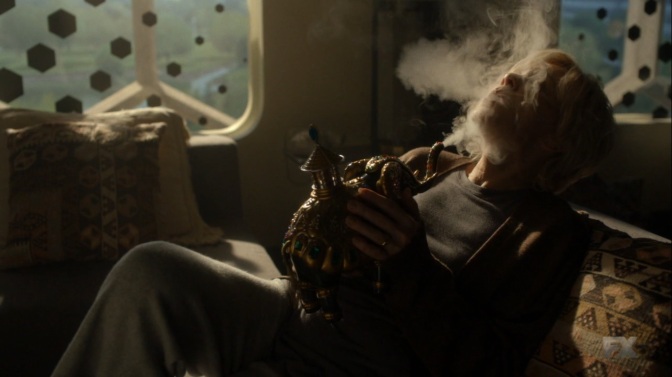 While Cary and Kerry are dutifully following orders, though, Lenny is enjoying a reckless bender now that she is free and in the flesh after so long in captivity (at both Division 3 and in Farouk’s mind). It soon turns out, however, that Amy’s consciousness still exists somewhere in her and convinces her to go help David.

This twist is a brilliant inversion of Lenny’s situation from last season – when she was the ghost in the machine in David’s head – and I look forward to seeing more of Amy acting as Lenny’s conscience. Season 2 has perhaps struggled to find a concrete role for Lenny in the narrative but I think having her gradually join David’s side and become a better person under Amy’s influence would be a great arc for her for the rest of this year and in season 3.

So, yes, Legion is still mostly going sideways instead of forwards but when it gives a range of the show’s incredible cast room to give some great performances like in ‘Chapter 17’, it’s hard to mind too much. Just two episodes to go before season 2 wraps!