In this episode, we have flashbacks to Star Wars: The Clone Wars with a Star Wars Rebels twist…

It starts off with Hera and Sabine dropping off Rex, Kanan, Ezra, Zeb and Chopper at a Separatist transport from the Clone Wars that crashed on the planet Agamar to salvage what weapons they can, mainly proton bombs. They find a munitions depot full of proton bombs, but they get trapped in a ray shield and are surrounded by Separatist battle droids. Everyone is surprised and confused to see them since they were supposed to be deactivated. The battle droids are ordered to shock the prisoners and bring up to them up to the command center; once again Chopper evades capture.

As Rex regains consciousness, he sees the outline of the battle droids and their leader a super tactical droid who turns out to be Kalani, a character appeared in the Battle of Onderon arc in The Clone Wars series. Rex’s memory flashes back to the war, but Kanan manages to snap him out of it. It is revealed that the droids have remained operational since the end of the war despite the shut-down command; Kalani assumed it was a Republic trick that prevented this. Seeing this as an opportunity to “end” the Clone Wars on his terms, Kalani proposes a test to prove that the Republic had tactical superiority. In battle simulation Rex, Kanan and Ezra will conduct “a Jedi rescue” scenario in which they will have to rescue Zeb, who will be held hostage in the command center. Rex is against it, but Ezra agrees to the challenge and says this is a chance to them to win this one last battle. Rex and Kanan reluctantly agree since they have no other options in their current dilemma.

In the meantime, Hera and Sabine have managed to snag a supply of fuel and are currently on the run from the Empire. On an Imperial Star Destroyer, Governor Pryce and Agent Kallus are informed of a rebel message that was intercepted from the Agamar system. Despite its encryption, its repetition gives all indications of a distress signal, to which Governor Pryce gives orders for an ambush on the unsuspecting Rebels. Back on Agamar, the stage is set for the pseudo-battle with Rex taking the lead because of his extension experience in the Clone Wars. While they manage to make it through the hanger, Rex chews Ezra out for nearly messing up the plan, even though it was not due to a fault of his own since Chopper decided to appear to tell him about the Separatist shuttles they can escape in. 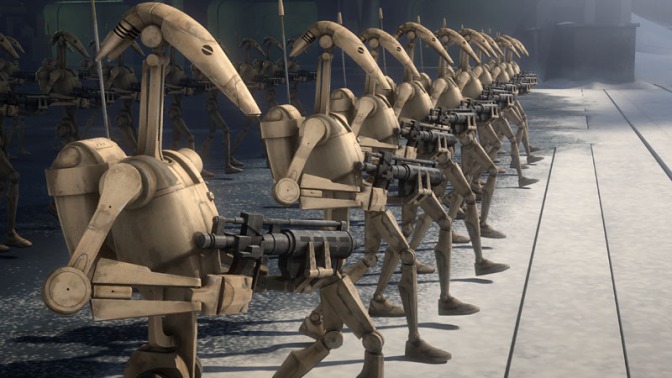 Rex, Kanan and Zeb in their final push towards the command center begin to notice that the droids are malfunctioning because they are so old. As they face off Kalani, Rex states that they won to which the super tactical droid disagrees. Ezra prevents Rex from shooting him and acknowledges that they would not have succeeded if the droids had been in peak condition. He goes on to say that while the Clone Wars ended, the Jedi were eradicated, the clone army disbanded, and the droid army shut down so no side was given a definitive victory. Ezra then asks if no one won the war who did; in that moment the Empire appears as if to answer the question. After convincing Kalani that they are fighting the same enemy since the Republic became the Empire, both Rebels and the droids join forces to fight off the Imperial storm troopers, making a strategic retreat using protons bombs to cover them as they escape in Separatist shuttles. With the “last” battle of the Clone Wars finally over Kalani and the Rebels go their separate ways.

I was looking forward to this episode because of the potential callbacks to Star Wars: The Clone Wars, which it did accomplish to a degree. The antics of the battle droids were fun to watch and bringing back Kalani was a nice touch even though he was a minor character in the grand scheme of the series from which he came. It also gave a glimpse the war’s effect Rex, sparking another reference to Cody which gives me hope that he might appear later in the season. The only thing that keeps it from being an amazing episode is the cringy line that Rex has at the end:

“No it was a victory. We all just won the Clone War and you ended Ezra. A galaxy of senators couldn’t do that. An army of Jedi, clones and droids couldn’t find the middle ground but you did.”

I think it is a little to much for Rex to just say that Ezra resolved all their differences; it just feels contrived especially when he puts Ezra on a glorified pedestal. However I don’t mind Ezra’s follow up in which he says, “Rex all I did was point out that none of you were meant to win. You couldn’t.” Despite my nit-picks, “The Last Battle” is still an episode with great heart that reflects on the past while progressing forward into the future.