The Doctor Who Christmas special has become an unlikely tradition in the last decade or so. Here’s a rundown of every single one so far…

Verdict: This episode started off the modern Doctor Who Christmas tradition in fine form. It cleverly withholds Tennant’s arrival until late in the episode, allowing for time to explore Rose’s feelings about the Doctor’s regeneration. Plus, it’s got a cracking invasion story with memorable aliens. 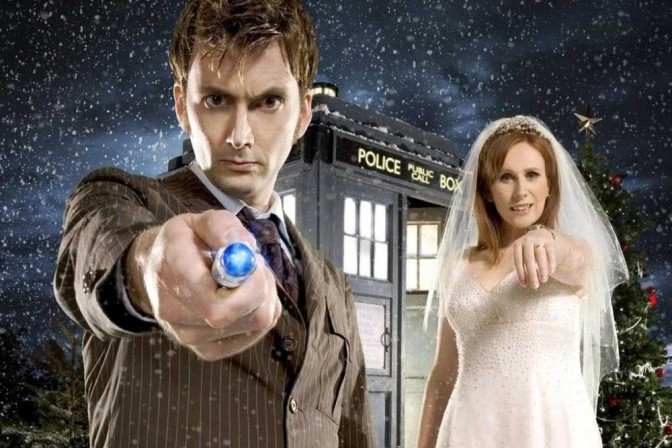 Verdict: Before she became a full-time companion in 2008, Catherine Tate featured a guest star in this second Christmas special. It is much fluffier than ‘Invasion’ and uses Tate’s broad comedy skills very well. Not one of the best, but still a fun slice of festive entertainment.

The one with: Kylie Minogue, Titanic in space, evil robot angels (not Santas)

Verdict: Doctor Who does disaster movies, as a spaceship replica of the Titanic is caught in an asteroid attack. A bit too much is made of guest star Ms Minogue – although her acting is fine – but mostly it is great Christmas mini-movie with a surprising amount of death.

The one with: The Walking Dead‘s David Morrisey as a fake Doctor, Cybermen, giant steampunk Cyberman over London

Verdict: The bait-and-switch of casting the fab David Morrisey as a fake future Doctor is a bit disappointing on first viewing, but in retrospect this is a great Victorian caper with a welcome return for the Cybermen. There’s a nice Dickensian air to proceedings too.