After a year away, the Doctor returns for a Doctor Who take on the superhero blockbuster. Let’s see if it soared up, up and away or failed heroically…

As the only piece of Doctor Who around this year (excepting spin-off show Class), this year’s Christmas special had to be something, well, special. Thankfully, ‘The Return of Doctor Mysterio’ delivered a classic slice of seasonal, superpowered entertainment, guaranteed to entertain fans of both Who‘s lighter-hearted Christmas specials and old-fashioned superhero movies.

Let’s make this clear: this episode is more of an ode to Superman by writer Steven Moffat than a usual Doctor Who story. Though there is something of Spider-Man in the New York setting, Batman in the growling voice and Iron Man in his glowing chest, the Ghost is very much in the mold of Christopher Reeve’s Man of Steel – complete with a “love triangle” between Grant, the Ghost and Lucy. Unlike the work of Zack Snyder, for example, ‘Doctor Mysterio’ is a love letter to the classic archetypes rather than a deconstruction of them, though there is some fun to be had from poking fun at the tropes (one joke about the actual effects of a radioactive spider bite is particularly funny).

Bringing Moffat’s breathless, zinging script to life is the talented cast. Peter Capaldi reminds us how much more settled down his Doctor is nowadays, as he effortlessly flits between serious exposition mode to wry barbed comment mode to full-on slapstick. As the Ghost, Justin Chatwin does a superb job at differentiating the superhero from his alter ego (with one of the best ‘superhero voices’ I’ve ever heard). Likewise, British Charity Wakefield sports a sturdy US accent and lots of pep as intrepid reporter Lucy Lombard nee Fletcher. 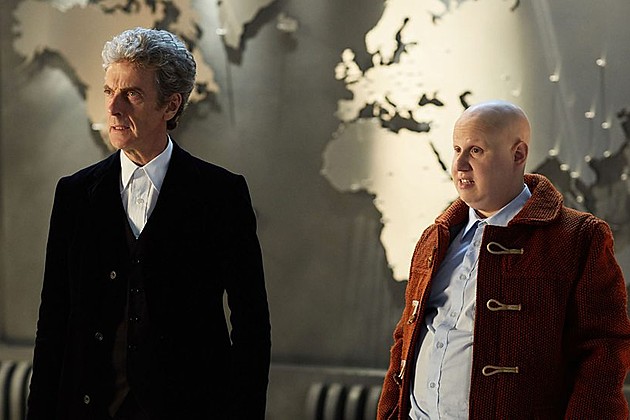 The standout, however, is surprisingly Matt Lucas. After his broadly comic supporting turn in the last Christmas special, many fans weren’t looking forward to him reprising the role here (ahead of a recurring position aboard the TARDIS next year). Brilliantly, though, Lucas and Moffat’s script refine his character Nardole as a sort of bumbling butler to the Doctor (in superhero terms, he is the Alfred to the Doctor’s Batman). While there are a few bawdy moments, Nardole now mostly offers one liners and can read the Doctor like a book. It makes for a very enjoyable comic chemistry between the two. If you told me that I would be looking forward to seeing more of the character next season before watching this special, I wouldn’t have believed you.

All this said, it isn’t a perfect episode. For one, the plot is underwritten and only serves as a distraction from the brilliant character dynamics. An alien invasion precipitated by an attack on a major city heavily recalls a previous story and the effective brain-with-eyes monsters are underused. It’s also a shame Moffat didn’t think to include a proper supervillain for the Ghost to face but perhaps there just wouldn’t have been room in the 60 minute runtime.

Overall, I can’t complain. Doctor Who is back and this episode left me grinning from ear to ear like the Joker. The trailer for season ten at the end gave me a lot of hope that the show will be given a fresh lease of life when it returns in the spring. If it can retain the sparkling wit and strong control of tone, as well as remembering to offer a good plot, the new season will be very super indeed.