As Hera, Zeb, Ezra and Chopper are waiting to rendezvous with other rebels, they are spotted by E-XD infiltrator droid. Concerned that it might report their location to the Empire, they try to take it out but Ezra is initially unsuccessful in shooting it down. Thankfully he manages to destroy the probe just as Gold Squadron makes contact with Hera; the Ghost pulls alongside and attaches to the freighter. There is criticism over the Ghost crew’s methods and that probe still might have been able to get a message through to the Empire so they need to refuel quickly and get moving. Gold Squadron also tells them that they will not be allowed abroad the freighter due to security conditions since they are carrying cargo important to the Rebellion and one that the Empire wants to capture.

But before they could refuel, Imperial ships come out of hyperspace and dispatch TIE Fighters to attack the Rebel vessels. Gold Squadron along with Ezra take position in Y-Wing starfighters to make a defensive parameter. Despite their best efforts the freighter’s shields are lost and while its crew transfers to the Ghost it is revealed that Mon Mothma was abroad, which makes her the secret cargo. After detaching the freighter from the Ghost, the rebels make their escape through hyperspace. It is explained that now former Senator Mothma is planning call for an alliance of rebel cells on the planet Dantoonie so they can have a united front against the Empire. 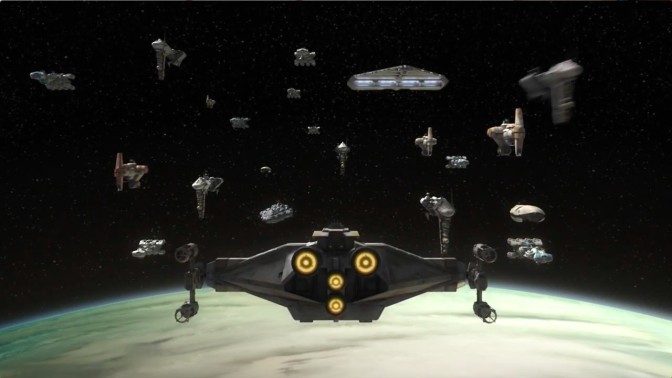 On Lothal, Thrawn shows his tactical genius in his calculation of the path the rebels will. Using his knowledge of Hera Syndulla, he determines she will use the Archeon pass which goes through a nebula which is very risky. He orders that a team of TIE Defenders lead by Vult Skerris to chase them through the nebula and have Governor Pryce and Admiral Konstantine wait for them on the other side.

Sure enough Hera directs their course through the Archeon Pass and the Imperial TIE Defenders are hot on their trail. Despite the Y-wings distracting them the Ghost ends up facing two Imperial Star Destroyers on the other side of the nebula and in the process gets caught in a tractor beam. But Mon Mothma stalls them long enough for the Ezra and the Gold Squadron to fire their ion cannons into the nebula which damages the Star Destroyer, freeing the Ghost. They then make it to Dantooine where Mothma calls on the rebels with these words:

“This is Senator Mon Mothma, I have been called a traitor for speaking out against a corrupt Galactic Senate. A Senate manipulated by the sinister tactics of the Emperor. For too long I have watched the heavy hand of the Empire strangle our liberties, stifling our freedoms in the name of ensuring our safety. No longer! Despite Imperial threats, despite the Emperor himself, I have no fear as I take new action. For I am not alone. Beginning today we stand together as allies. I hereby resign from the Senate to fight for you, not from the distant hall of politics but from the front lines. We will not rest until we bring an end to the Empire, until we restore our Republic! Are you with me?”

After a few moments, a number of ships arrive in the system from hyperspace and the Rebel Alliance that we know from Original Trilogy and Rogue One begins to take shape.

While I am not doubting the significance of this episode in forming the Rebel Alliance that we see in the Original Trilogy, this episode did not engage me as much as the others have this season. Don’t get me wrong, having Mon Mothma was great, but I couldn’t help but feel she distracted us from the main characters. I mean Bail Organa had less speaking lines in all his appearances spanning through the entire show than she did in this one episode. Plus it was no secret that she was the secret cargo, since the previews revealed that weeks ago, so there was no element of surprise. I guess what I am saying is I wish there more buildup and that her appearance would be more of a genuine surprise. Besides the episode was still a solid one and I would recommend it to anyone who wants to see how the the Rebel Alliance came to be.

Next Time on Star Wars Rebels: