Can Superboy and Robin defeat Kid Amazo and his android army without their help of their fathers? Find out in our review of Super Sons #4…

Super Sons has proven to be one of the best new books from DC Rebirth, thanks to Peter Tomasi’s fast and funny writing and the winning dynamic between Jon Kent and Damian Wayne. As issue four brings this first story arc to a close, you’ll be pleased to hear it is just as good as the instalments that came before it.

There is a fun wraparound narrative as Lois and Alfred realise that Jon and Damian are missing from their beds – because, unbeknownst to them, the boys have been kidnapped by Kid Amazo, who plans to replace the Justice League with his own android replicas. Likewise, there is a welcome cameo appearance from Lex Luth… er, we mean Superman. As with his appearance in Super Sons #2, Tomasi nails Luthor’s character – he might be wearing the ‘S’ shield and the cape nowadays but that doesn’t make him a straight-up hero. Mostly he is in it for his own ego and he only comes to rescue the boys when he finds out that Kid Amazo stole his tech. 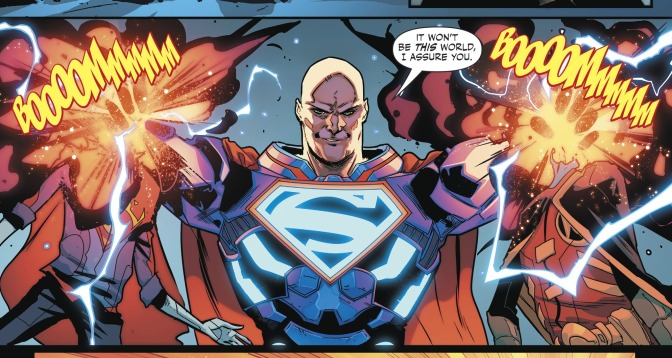 Still, the issue belongs to the titular Super Sons and their uneasy partnership remains the main reason to read. Damian might be an arrogant douche, but he has inherited a lot of his father’s smarts. Likewise, Jon might still be wet behind the ears when it comes to the superhero game, but his compassion and courage is second to none. Kid Amazo is also a great antagonist to square them up against, as he is basically an insane super-powered schoolyard bully.

Of course, Peter Tomasi is just one half of the dream team that makes this comic so special, as Jorge Jimenez provides such high-quality artwork. His work is deceptively simple and he has a knack for capturing preteen faces better than anyone (e.g. Damian’s petulant frown and Jon’s big, wide eyes).

With some fun cameo appearances, excellent artwork and the continuing mini-Superman/Batman partnership that is Jon and Damian, Super Sons #4 is another terrific issue.