After being busted by Lois and Alfred for fighting Kid Amazo last issue, Super Sons 5 sees both Jon and Damian grounded. But with his emotions running high from having to control his powers and the Kents’ imminent move to Metropolis, Superboy runs away from the Kent farm and goes to Gotham to pick a bone with his partner in crime…

The result is a low-key, bottle issue, as there is no villain to fight or a great deal of locations involved. Instead it takes a look at both boys, their growing friendship and how they relate to their fathers. Because of how well Peter Tomasi has written Jon and Damian in the previous four issues, it makes for an excellent read just following these characters working through emotional problems instead of physical ones. Though, don’t worry, there is also a battle between Jon and Damian in the awesome visual backdrop of the Batcave.

One of my favourite parts of this book is when it touches on the parallels between the sons and their fathers and there is much to enjoy on that front here. The reminder that Bats and Supes weren’t always as tight as they are now is great, as is the arrival of two Super-dads towards the end of the issue to support their sons. It results in this hilarious BvS-referencing exchange: 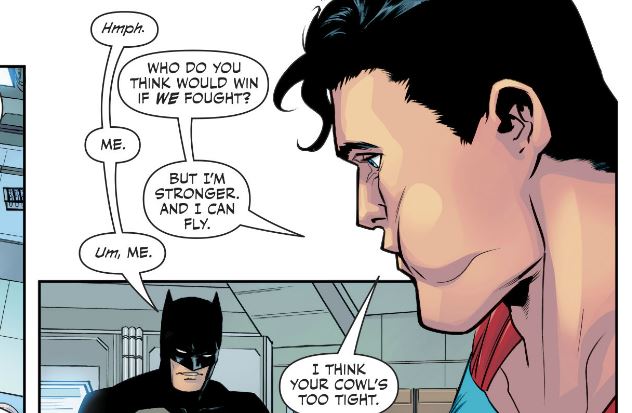 Despite all the superheroes on show, it’s Mr Alfred Pennyworth who is the MVP of this issue. Not only does he help Jon and Damian understand that even their fathers once argued just as they do, he also nabs the most laugh-out-loud hilarious line of the issue: “I cannot believe my life has come to a place where I have to say this… please step out of the dinosaur’s buttocks.” I promise it makes sense in context.

So will the Super Sons be firmer friends from now on? I hope so. While their constant verbal (and physical) sparring has been fun, it is probably time for their partnership to move up a level. With the boys’ vigilante activities now an official thing, as they now have the blessing of Bruce and Clark (good luck convincing Lois, Supes!), let’s hope so.

I guess some might see this as a ‘filler’ issue, but to me it’s an important character-led installment and I had a lot of fun with it. Top marks!