As Class 1-A create their hero identities and choose what Hero Agencies they want to shadow, Iida is dealing with the family tragedy involving his brother.

Much like the first episode of season 2 did for the Sports Festival Arc, this one is setting up for events of the Field Training Arc where the students go into field and see Pro Heroes at work. But before they can go out, they need to pick their Hero names that they would like to go by. To be honest, I had been waiting for this moment for awhile and it was fun to see the students’ creative process as they came up with their names. While I think this might have been better as a take-home assignment, the way it was done was faster and Midnight was there to provide guidance if they choose a name that was not appropriate…cough…Bakugo…cough. Some of my personal favorites were Uravity for Uraraka and Tsukuyomi for Tokoyami. And of course Midoriya’s choice of Deku was a good one, since it shows how far he has come and that he turned what used to be an insult into a name for a Pro Hero. 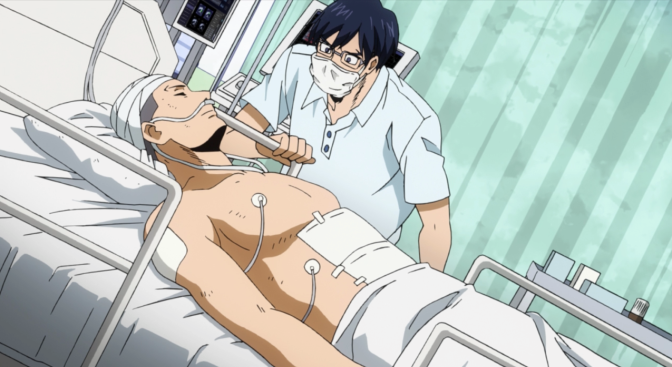 An underlying plot involves Iida dealing with his older brother’s condition after sustaining massive injuires in Stan’s attack. Tensei tells Tenya that his legs are paralyzed and that his career as a Pro Hero over and requests that he take on his name Ingenium in order to keep his legacy alive. However Iida couldn’t bring himself use that name and decided on his first name for his Hero name. I couldn’t help but feel sad for Iida as he choose to suffer in silence, deflecting away any conversation involving his brother. This is a recipe for retaliation and I only hope he doesn’t lead down a path he can’t return.

Also in the episode Midoriya receives an offer to undergo Field Training with Gran Torino who was All Might’s mentor back in the day and also know the secret of “One-For-All.” All Might starts to act like Midoriya spiraling into a cycle of worry over what his mentor may think about his successor and his teaching methods. Regardless, All Might gives him the address, and after the end credits we are greeted to a rather humorous scene involving Midoriya and Gran Torino. A good beginning to what promises to be a great arc.