Super Sons #3 begins with not one, but two exciting action-oriented opening scenes, as a flashback sees the Super-Duffy family taking on the cyborg gorilla Titano and then, back in the present, Superboy and Robin are taking on their toughest challenge yet – android doubles of their fathers! To say any more about the issue would be to spoil it but, suffice it to say, that it hits the ground running and doesn’t let up from there.

With #3, then, Peter J. Tomasi’s script often lets the art do the talking, and thankfully Jorge Jimenez continues his tremendous work from the previous two issues. It’s strong all round but he’s especially good at capturing the teenage forms of Jon and Damian – the former is all gangly like a baby giraffe while Damian is still waiting for his growth spurt. I also love Alejandro Sanchez’ colours as every panel is so bright and vivid.

The only real complaint is some of the plot developments in the second half of the issue. Kid Amazo is a suitably powerful adolescent villain for the Super Sons to face, but a reveal about the Duffy family is a bit confusing and might leave you scratching your head. His sister Sara is an interesting addition to the boys’ group of super-kids, though, especially as her presence might bring more trouble… 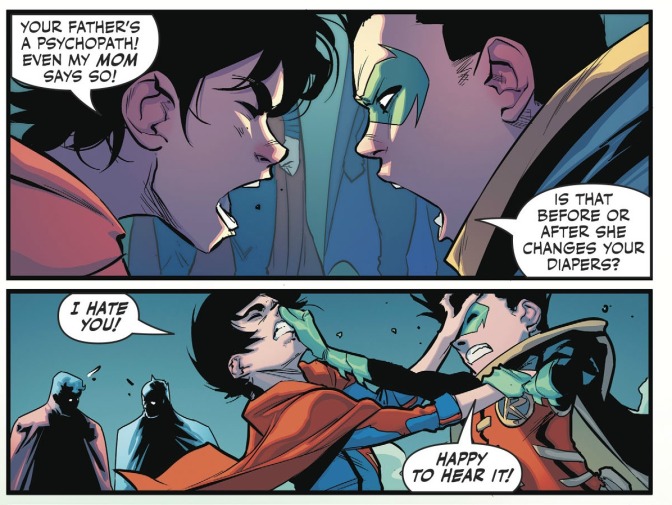 As ever, though, the highlight of Super Sons is the dynamic between Jon and Damian, as their constant bickering is always hilarious. The pair are exact opposites – Jon is superpowered but younger and naive, while Damian is mortal but believes himself to be the world’s greatest hero. Damian is such an all-round jerk that he might be hard to like on his own, but bouncing him off an everykid like Jon really works. Plus, he has a good line in zinging put-downs. Still, there is a real partnership and bond growing beneath their outward dislike of each other that is a lot of fun to see develop.

Super Sons #3 is another great issue from one of the most (so far) consistently entertaining books of DC Rebirth. Even when the plot wobbles, it can still be enjoyed for providing one of the best new dynamics duos we have seen in a while.