I’ve said a lot this year about The Flash season three’s overreliance on gloom and darkness instead of actual drama and fun. As we head into next week’s finale, the show finally seems to have reacquired the winning balance of previous seasons as ‘Infantino Street’ was as good an episode as the show has ever had.

As we found out last week. the STAR Labs gang need a massive power source to charge Tracy Brand’s Speed Force Bazooka to trap Savitar in the Speed Force. Fortunately, ARGUS have just such a doohicky left over from the Dominators’ invasion. Unfortunately, they won’t let Barry have it. Looks like he might need the help of a master thief to help him break in and steal it…

Yes, this episode was a real treat as Leonard Snart returned, courtesy of Barry travelling back in time to before his death. It was great to see Wentworth Miller again, especially as it was the ‘heroic’ version rather than the original supervillain (who recently joined the Legion of Doom over on Legends of Tomorrow). Barry and Snart always make for a fun double act and Captain Cold is on fine form here, dishing out nods to his previous adventures and even breaking the fourth wall (that cheeky nod about King Shark staying in the shadows because they can’t afford to make him look good). Speaking of which, King Shark didn’t do too much but, hey, I’m never going to turn down a cameo from a man-sized shark monster. 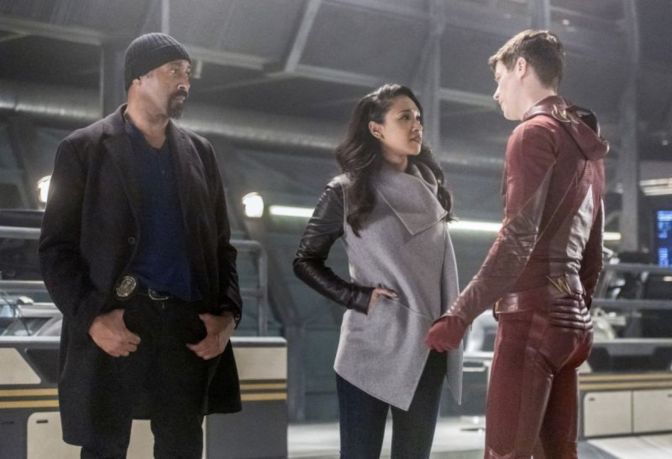 For the second half of the episode, things really heat up as we get what I think we all assumed would be the big confrontation of the finale – the fateful day that Iris is murdered by Savitar on Infantino Street, as foreseen by Barry back in December. For a moment, Team Flash’s plan seems to have worked but it is revealed that Savitar was prepared for the Speed Force Bazooka and he proceeds to KILL IRIS! This whole sequence is terrific, equal parts shocking and thrilling. It also leaves us with much left to ponder over the next week. Is all as it seems? Is Iris really dead?

Personally, I’m not buying it. The use of H.R.’s transmogrifier earlier in the episode was surely a deliberate plant to provide an explanation for someone else being killed in Iris’ place. My theory is that H.R. has made the ultimate sacrifice here, seeing as he felt so terrible for letting slip Iris’ location to Savitar in the first place. There was also a lot about him finding happiness with Tracy earlier in the episode. Any fan of Joss Whedon’s work will tell you to be afraid for a character’s fate if they finally find happiness.

Yes, there was darkness in ‘Infantino Street’ but it was of the genuinely dramatic kind rather than the depressing glumness of much of this season and it was also balanced out by an entertaining caper which saw the return of a much-loved character. After ups and downs, the stage is set for The Flash season three to go out on a high.